Till now, Nokia 9 was running only Android 7.1.1 Nougat OS in the earlier leaks.

We already know that Nokia is also working on its Nokia 9 smartphone which is said to be released at the end of Q3. Now the smartphone has been spotted on the GFXBench benchmarking website with Android 8.0.0 Oreo operating system, as per a report of The Android Soul. Till now, Nokia 9 was running only Android 7.1.1 Nougat OS in the earlier leaks.

The GFXbench listing means that the company is testing out the Android 8.0 build on the Nokia 9. It is now expected that the Nokia 9 will come pre-installed with Oreo update or it will later receive the Android 8.0 as an over the air (OTA) update soon after the launch of the handset. 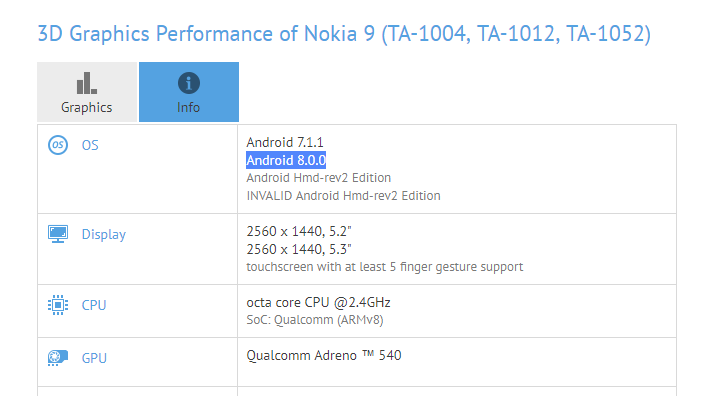 The Indian pricing of the Nokia 9 was also leaked earlier and the smartphone is expected to come with a price tag of Rs 44,999. Interestingly, the smartphone will be priced at EUR 749 in European markets and $699 for the US market, which means that Indian consumers will be getting the flagship device from Nokia at a lesser price tag as compared to the other markets. As for the availability is concerned, the leaks suggested that the smartphone will be unveiled at the end of Q3. However, there is no way to authenticate this leak as of now, so we suggest you take this report with a grain of salt.

Earlier leaks have revealed some key specifications and features of the Nokia 9. To start with, the Nokia 9 will be the first Nokia device to feature ‘Nokia OZO Audio’ enhancements and it will feature a 5.5-inch QHD OLED display. It said to be powered by a Snapdragon 835, along with Adreno 540 GPU. It will come with 6GB/8GB of RAM and 128GB of internal storage. The smartphone will run on Android 7.1.1 Nougat operating system and will be backed up by a 3800mAH battery with Qualcomm Quick-Charge 4 support.

On the camera front, the smartphone will sport a 12-megapixel dual Carl-Zeiss rear camera and a 12-megapixel front-facing camera for selfies. The smartphone is also said to house a fingerprint scanner and will also feature an Iris Scanner as well. Further, the Nokia 9 will have IP68 certification for water and dust resistance.