All three devices having the same title 'Unknown Heart' but carry different specifications.

HMD Global seems to be gearing up to launch three new smartphones shortly, as three unannounced Nokia smartphones have been spotted on Geekbench with ‘Unknown Heart’, revealing few key specifications. All three devices having the same title but carry different specifications. Looking at the specs and comparing previous reports these three Nokia devices could be long rumoured Nokia 7, Nokia 8 and Nokia 9 smartphones.

Recently, a new video had been spotted on Vimeo (now it has been taken off, only mirror image available) showing four Nokia phones in which two of them can be identified as Nokia 3 and Nokia 5, but other two phone said to be long rumoured Nokia 7 and either Nokia 8 or Nokia 9 smartphones.

As per GeekBench listing, alleged Nokia 9 will be powered by an ARM implementer 81 architecture 8 variant 10 part 2048 revision 1″ which belongs to Qualcomm Snapdragon 835 processor clocked at 1.90 GHz, paired with 4GB RAM. The smartphone will run on Android 7.1.1 Nougat. Further, the smartphone scored 1815 in single-core test and in muli-core test it received 6278.

As per listing, the alleged Nokia 8 will be powered by upcoming 1.84 GHz Octa-core Qualcomm 660 processor, with 3GB of RAM and will run on Android 7.1.1 Nougat. Further, the smartphone scored 1588 in single-core test and in muli-core test it received 5455. 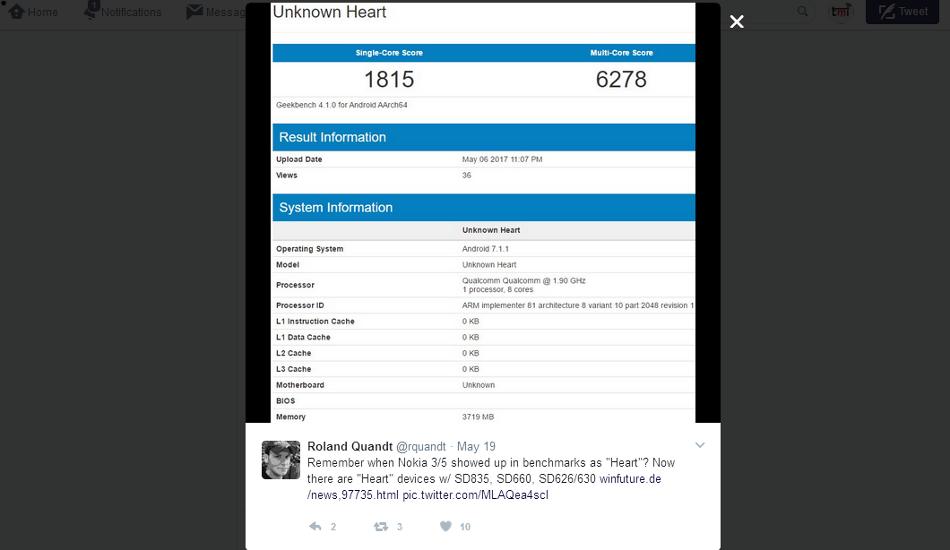 On the other hand, alleged Nokia 7 will be powered by a Snapdragon 630, in contradictory to earlier reports which hinted towards the use of Snapdragon 660 chipset. The smartphone will have 3GB of RAM and will run on Android 7.1.1 Nougat operating system. Further, the smartphone scored 720 in single-core test and in muli-core test it received 3235.

As per previous rumours and reports, Nokia 8 expected to sport a dual rear camera setup and the other one which has single camera setup might be launched as Nokia 7. Other specifications would be Full HD (1080p) display on the Nokia 7 while Nokia 8 is expected to have a Quad HD display. Further, they will have CarlZeiss lens and will sport metallic unibody design. The smartphones also expected to house fingerprint readers and will have fast charging support.

As far as rumoured specifications of Nokia 9 are concerned, it will be the first Nokia device to feature ‘Nokia OZO Audio’ enhancements, and it will feature a 5.5-inch QHD OLED display. It will come with 4GB/6GB of RAM and 64GB/128GB of internal storage. It will be backed up by a 3800mAH battery with Qualcomm Quick-Charge 4 support. On the camera front, the smartphone will sport a 22-megapixel dual Carl-Zeiss rear camera and a 12-megapixel front-facing camera for selfies. The smartphone is also said to house a fingerprint scanner and will also feature an Iris Scanner as well. Further, the Nokia 9 will have IP68 certification for water and dust resistance.

Nokia 9, might be released at the end of Q3 2017. The smartphone is said to be priced at EUR 749 in European markets and $699 for the US market. Further, the Indian pricing of the Nokia 9 was also leaked and the smartphone is expected to come with a price tag of Rs 44,999. Which means that Indian consumers will be getting the flagship device from Nokia at a lesser price tag as compared to the other markets.