The GeekBench listing implies that the company is perhaps testing the latest software and may release the same for the device soon.

Advertisement
Nokia 8 was recently launched in London with Android Oreo operating system. Now seems like the phone will be receiving the Android Pie update soon as the phone has been spotted GeekBench benchmarking website with the latest version of Android.


The GeekBench listing implies that the company is perhaps testing the latest software and may release the same for the device soon. The Nokia 7.1 also recently received an Android 9 Pie update. 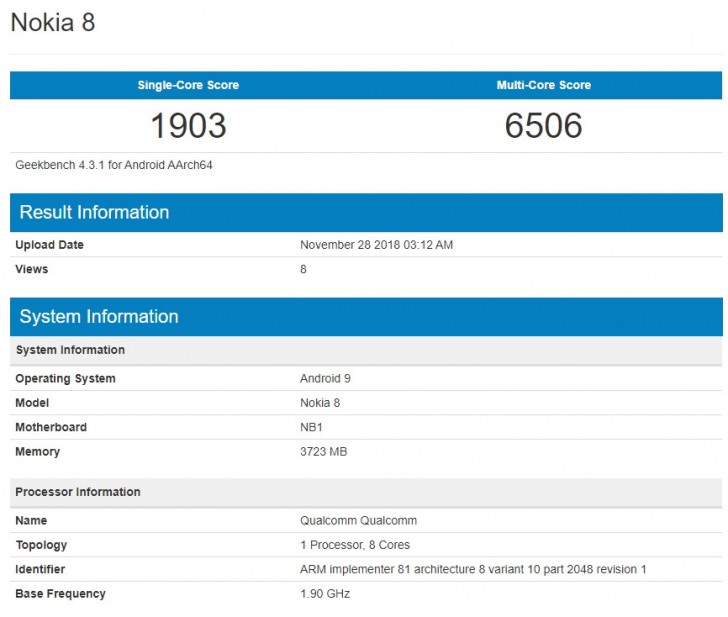 To recall, the company launched the Nokia 8 in India in September last year for Rs 36,999. Recollecting some key specs, the Nokia 8 comes with a 5.3-inch IPS QHD display with a resolution of 2560 x 1440 pixels which is protected by Corning Gorilla Glass 5 in a 2.5D finish.

The flagship Nokia phone is powered by an octa-core (Four 2.5GHz Kryo + Four 1.8GHz Kryo) Snapdragon 835 processor with 4GB of LPPDDR4X RAM along with 64GB of internal storage which can be expanded to 256GB. It comes in a 6000 series aluminium body in has four colour options-- two with the glossy finish and two in Matte Polished Copper, Polished Blue, Tempered blue and Steel.