Nokia 6 vs Moto G5 Plus vs Redmi Note 4: The war for the best begins

Assuming all these three devices will be priced similarly, let’s find out if the latest offering from Lenovo (Moto) and Nokia can give Redmi Note 4 a run for its life. Note, that, we are not taking price into consideration here as the final pricing of Moto G5 Plus and Nokia 6 is not yet out for Indian smartphone market.

Mobile World Congress has hosted a tonne of smartphone launches already and as we keep you updated about the biggest tech show, we thought of putting a couple of devices against the recently launched Xiaomi Redmi Note 4. Lenovo launched the new Moto G5 Plus and Nokia 6 is now global. Assuming all these three devices will be priced similarly, let’s find out if the latest offering from Lenovo (Moto) and Nokia can give Redmi Note 4 a run for its life. Note, that, we are not taking price into consideration here as the final pricing of Moto G5 Plus and Nokia 6 is not yet out for Indian smartphone market.

Design and Display
Design, in budget smartphones, has been improving remarkably over the past few years. The aluminium unibody design which was once a trademark flagship feature is now a common affair in budget segment. In other words, the design on all these three smartphones will not disappoint you by any means. 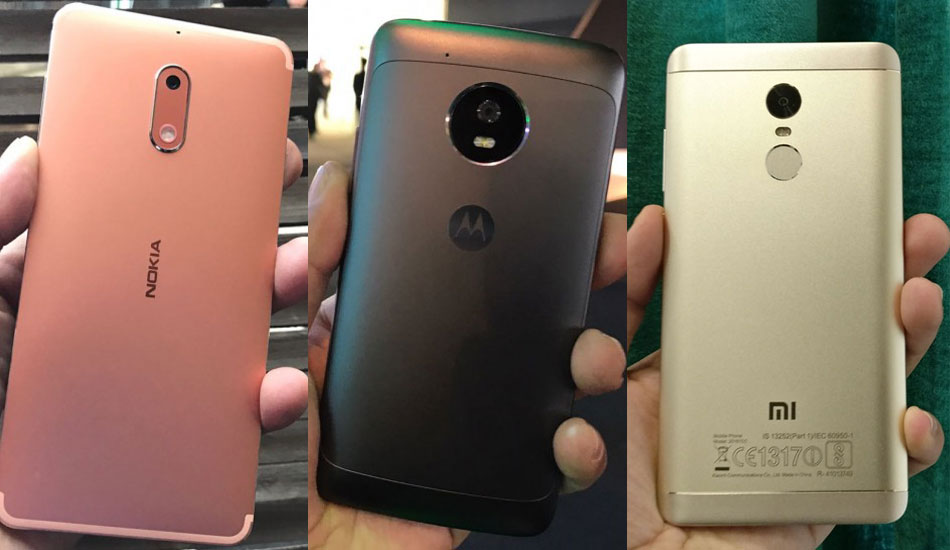 Starting with Nokia 6, the company claims that the device is built out of a solid block of 6000 series aluminium and have received two separate anodising processes. The regular variant comes with a matte finish at the back while the Arte Black variant comes with a glossy finish at the back. The antenna bands lie at the top and bottom edge making it for a cleaner back panel which boasts some Nokia branding and the rear camera setup. Nokia 6 comes in Matte Black, Tempered Blue, Silver and Copper colour options apart from premium looking Arte Black variant. The Nokia 6 measures at 154 x 75.8 x 8.4 mm and weighs 165 g.

Coming to the Moto G5 Plus, the device comes with a aluminium shell this time unlike the textured back panel we saw last year in Moto G4 Plus. The back of the device is curved and we get Moto Z-like smartphone setup at the back this time. We had mixed feelings for the Moto G5 Plus’s design as we really liked how the company went out of the way, last year, and gave a polycarbonate back panel. In contrary, the G5 Plus looks solid in pictures and is a more compact device of the three. The phone measures 150.2 x 74 x 9.7 mm and weighs 155 grams.

Lastly, coming to the Redmi Note 4, the latest offering from Xiaomi also comes with a unibody aluminium shell which slightly curves at the back with the side edges being flat to give an extra amount of grip to users. In terms of design, Redmi Note 4 looks a lot similar to its predecessor , the Redmi Note 3 which in itself was a pretty solid device. The fingerprint sensor on the Redmi Note 4 lies at the back while we do get three touch-sensitive buttons at the front. Redmi Note 4 measures at 151 x 76 x 8.5 mm and weighs at 165 g.

Verdict: Nokia 6 because the matte finished aluminium at the back of the Nokia 6 gives a lot more fresh and premium look.

Now for the display, we have two devices with same size and resolution while one comes with a smaller display. Again hitting the Nokia 6 first, the display on the device is 5.5-inches 2.5D curved and sports a Full HD (1920 x 1080 pixels) resolution. We get the same 5.5-inch Full HD IPS LCD 2.5D curved display with a resolution of 1080 x 1920 pixels on the Redmi Note 4. However, Moto G5 plus coming with a slightly more compact factor, sports a 5.2-inch full HD display with a screen resolution of 1920 x 1080 pixels with Gorilla Glass 3 protection.

Verdict: Well this one is tough to decide. The display on both Nokia 6 and Redmi Note 4 is exactly the same so there is not much to choose from between these two while the one on the Moto G5 Plus is a compact display with larger pixel density. The ball is in your court for this one.

Performance and Memory
Performance is considered the brain of a smartphone while the OS is its heart. Smartphones these days are breaking every record in terms of performance, however, what actually really matters is the day-to-day usability and convenience while using the device. Now we haven’t got our hands on the Nokia 6 and Moto G5 Plus yet, so this section purely depends on the spec sheet as of now. 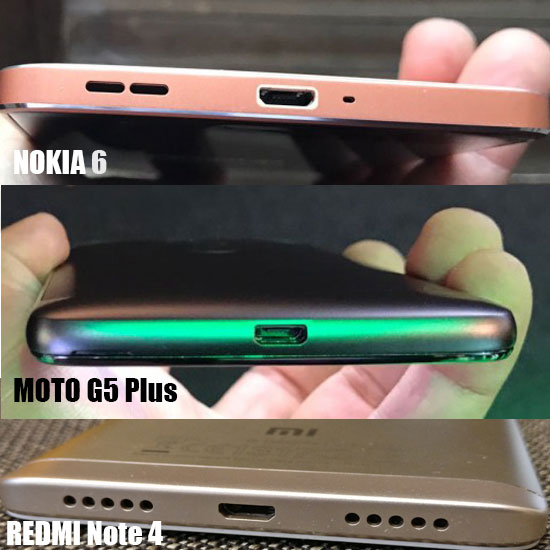 For the internals, Nokia 6 comes with a 1.4 GHz octa-core Qualcomm Snapdragon 430 processor along with Adreno 505 GPU. The device sells with 4GB of RAM and 64GB of internal storage for the Arte Black variant, while all the other variant come with 3GB RAM and 32GB of internal storage. Further, the internal storage in all the variants is expandable up to 256GB via microSD card which sits in a hybrid Dual SIM tray. Apart from this, Nokia 6 comes with Android 7.1.1 Nougat and the Finnish giant claims that it will come with pure android experience.

Whereas, the Moto G5 Plus is powered with a Qualcomm Snapdragon 625 processor coupled with Adreno 506 GPU. The phone comes in two options—2GB/32GB variant along with 4GB RAM and 64GB internal storage model which can be further expanded up to 128GB via microSD card. For the software, Moto G5 Plus comes with Android 7.0 Nougat with pure Android experience as well.

Lastly, the Redmi Note 4 comes with a 2.0 GHz Octa-Core Qualcomm Snapdragon 625 chipset with Adreno 506 GPU. The most powerful variant for the Note 4 comes with 4GB of RAM and 64GB of internal storage which is again expandable via microSD card. (Hybrid Dual SIM slot) One relative downside for the Redmi Note 4 is that it still runs on Android 6.0 Marshmallow, although Nougat update is already been in testing since last month. Further, it runs Xiaomi’s own MIUI 8 (now updated to MIUI 8.2) on top of Android.

Verdict: Moto G5 Plus – While Nokia 6 comes with the latest Android, it lags behind in terms of the chipset. Redmi Note 4 comes with a powerful chipset but still runs on an older Android version with its heavy skin on top. Moto G5 appears to be the winner here as it comes with Android Nougat and Snapdragon 625 chipset.

Camera
Smartphone cameras are generally used as the primary resource to capture most of our memories. While we will surely not get the best camera setups at this price point (Below 20K), we have seen some commendable developments in this segment recently. Commenting on the camera performance before actually testing it thoroughly wouldn’t be fair on our part so we leave this one for the later review. As far as camera figures are concerned, here it is. 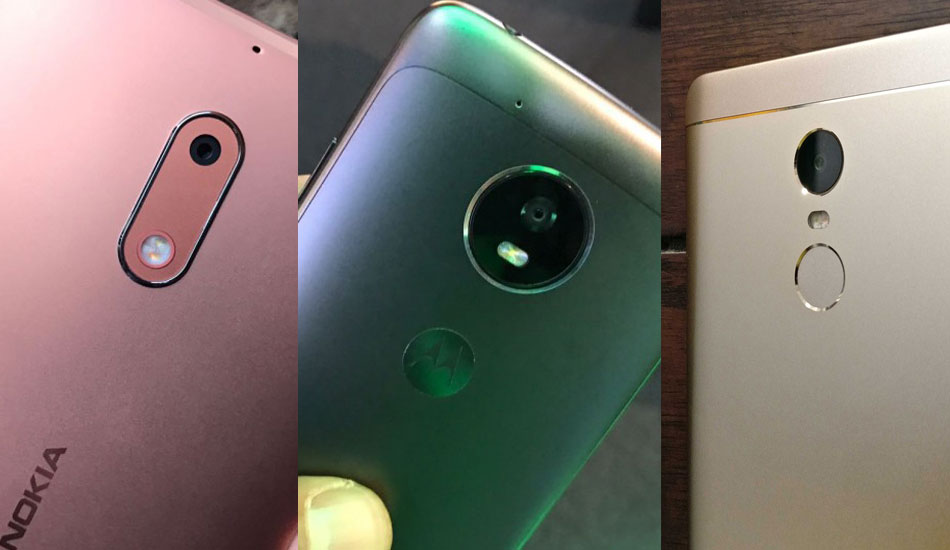 In terms of optics, Nokia 6 comes with a 16-megapixel camera with PDAF, 1.0um sensor, f/2.0 aperture, and dual-tone LED flash. While at the front, we have an 8-megapixel front-facing camera with a 1.12um sensor and f/2.0 aperture for selfies and video calling.

In Moto G5 Plus, we get a 12-megapixel rear camera with aperture f/1.7, 1.4-micron pixels, dual AF pixels and LED flash while for the front, there is a 5-megapixel shooter for selfies and video calling.

Verdict: While we did test out the camera on the Redmi Note 4, we are yet to test the ones on the Nokia 6 and Moto G5 Plus so stay tuned before we make out a final verdict as to which smartphone (out of these three) sports the best camera.

Battery and Connectivity
This is where Redmi Note 4 comes to the picture and somewhat destroys the other two devices. The Redmi Note 4 packs in a 4100 mAh battery inside and with battery efficiency of Snapdragon 625 SoC, the battery life on this device can give you amazing results. Coming to Nokia 6, we get a 3000 mAh battery inside which will still give you a decent battery life, if we go about past devices sporting similar specifications. Lastly, Moto G5 Plus also comes with 3000mAh battery with Turbo Charging support and the Snapdragon 625 SoC will help extract some juice here as well.

In terms of connectivity, we don’t get anything extra ordinary. All these devices come with Dual SIM capabilities, Wi-Fi, Bluetooth (version may vary), GPS with A-GPS. However, both the Nokia 6 and Moto G5 Plus also comes with NFC on board. We get microUSB 2.0 on all these devices and a fingerprint scanner as well.

Verdict: Nokia 6 and Moto G5 Plus just because of the inclusion of NFC.

Wrapping Up
Now to choose between these devices is a really tough task, as of now because we are not aware of the prices at which the Nokia 6 and Moto G5 Plus will launch in India. Redmi Note 4 currently sells for Rs 12,999 for the 4GB RAM and 64GB internal storage version via Flipkart (flash sale). In terms of specifications, Moto G5 Plus looks on par with the Redmi Note 4 except for the battery while the Redmi Note 4 misses out on Android Nougat out of the box. Nokia 6, though comes with a solid design sports a slightly lower graded Snapdragon 430 chipset. So in terms of specifications, Moto G5 and Redmi Note 4 both looks promising while Nokia 6 have that brand name and reliability coming along with it. Let us know your thoughts on this one. Comment Below.

Share
Facebook
Twitter
WhatsApp
ReddIt
Previous articleExclusive: Huawei P10 to be launched in July in India, Honor V9 and Holly 3 Plus by April
Next articleApple to go for USB-C port instead of Lightning connector in the upcoming iPhones
RELATED STORIES