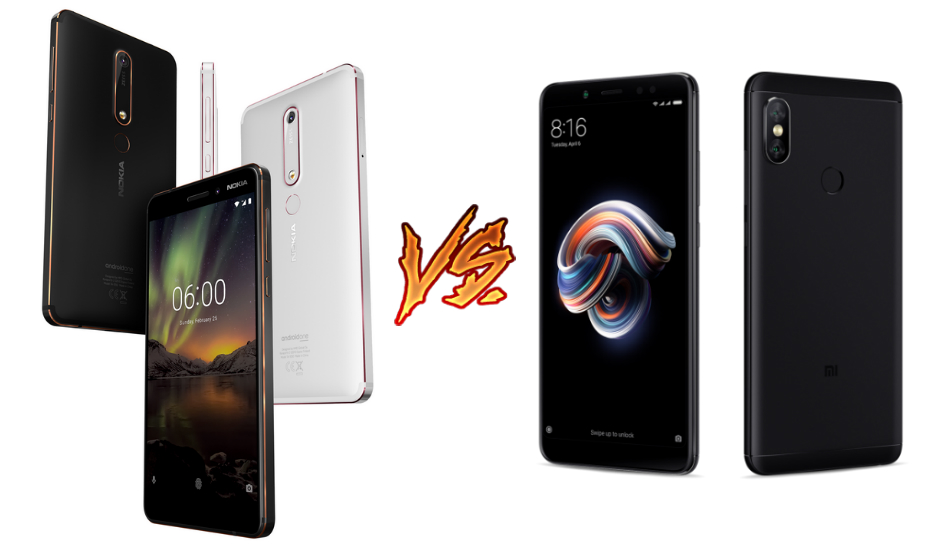 Both recently launched phones come with a price tag of Rs 16,999 with displays under 6-inches.

HMD Global just announced the launch of the 2018 version of Nokia 6 featuring a 5.5-inch FHD screen with a resolution of 1920×1080 pixels and a 2.5D curved display with Corning Gorilla Glass 3. The device is powered by a mid-range Qualcomm Snapdragon 630 processor running on the latest Android 8.0 Oreo interface.

The entry variant of the Nokia 6 (2018) is priced at Rs 16,999, the same price at which Xiaomi sells its recently launched Redmi Note 5 Pro (6GB) in India. So let’s check out how these two devices fare when pitted against each other the lower mid-range segment of smartphones.

Please note we have reviewedRedmi Note 5 Pro and have shared our 1st impression about Nokia 6.

The Redmi Note 5 Pro comes with a metal unibody design with a fingerprint scanner lined up at the centre of the rear panel, which isn’t anywhere close to the device’s camera unit, thus avoiding smudges at the sensors. Though Xiaomi has tried to push the smartphone to have a taller form factor due to its display, it fails to impress in its design since it looks a lot like any of its older Redmi siblings.

This is where the Nokia 6 (2018) impresses the most and outbids the Redmi device by a huge margin. The Nokia 6 is built on a sturdy 6000 series Aluminum unibody with an orangish golden accent running along the edges, the circular fingerprint sensor and around the camera unit, giving it an elegant look. Though the corners are curved, the edges appear a superior choice thanks to the brushed metal with volume and power keys on the right. The phone isn’t taller and is half an inch smaller than the Redmi Note 5 Pro making it something that will be easy to handle with.

The Nokia 6, being the more recently launched smartphone still features a standard 16:9 display in an era where smartphone manufacturers are developing taller screens with 18:9 aspect ratio. The display is a 5.5-inch FHD screen with a resolution of 1920×1080 pixels and 2.5D curved display with Corning Gorilla Glass 3 protection. The Nokia 6 only offers a decent 73.2 percent of screen-to-body ratio.

The Redmi Note 5 Pro is the first Xioami-made device that featured a taller 18:9 display and thus the device offers a better resolution of 2160 x 1080 pixels on its 5.99-inch FHD+ screen. Due to its lesser width, the Redmi device is easier to hold, has minimal bezels offering a larger scree-to body ratio of 77.4 percent.

The Redmi Note 5 Pro, on the other hand, comes with a much improved Snapdragon 636 processor with the variant in question featuring 6GB of RAM and 64GB of onboard storage, outdoing the Nokia device in every aspect.

In terms of connectivity, both the Redmi Note 5 Pro and Nokia 6 feature Bluetooth v5.0 with Wi-Fi 802.11 a/b/g/n, Wi-Fi Direct, hotspot and would need users to replace the SIM2 slot for use of an additional microSD card. While the Xiaomi device still equips the primitive micro USB 2.0 for charging and data transfers, the Nokia 6 makes use of a Type-C 1.0 reversible connector.

The Redmi Note 5 Pro, however powerful as a device runs on the no-so-latest Android 7.1.2 Nougat with MIUI 9 skin on top. Though its UI is a lot lighter than any Xiaomi device in the past, it’s not flawless and still packs in a bunch of bloatware that one might struggle to get rid of.

The Nokia 6 (2018) runs on the Android One initiative which means the HMD-made device will get regular Android and security updates alongside Google’s own lineup of smartphones. The Nokia 6 already runs on an Android 8.0 Oreo and is close to a stock experience thus offering a friendlier user experience for anyone who’s getting started with Android.

The batteries on both Redmi Note 5 Pro and Nokia 6 support Quick charging but the Xiaomi made packs up more juice due to its 4,00mAh battery. The Nokia 6 on the other hand only packs a meagre 3,000mAh power unit for a device that places itself in the lower mid-range price bracket.

The Xiaomi Redmi Note 5 Pro sure does come with an abundance of specification in almost all front. It packs a powerful configuration withSnapdragon 636 and 6GB of RAM, has dual rear cameras, a 20MP front camera, and a humongous battery, but still a couple of drawbacks. HMD has really come up with a rugged looking Nokia 6 (2108) which packs sufficient features in its price range on an elegant casing but falls short on several hardware aspects.

So, if having a beast of a performer is what you crave for, the Xiaomi Redmi 5 Pro will tick all the necessary points but you’ll have to settle for a standard looking phone and a not-so-new firmware. The Nokia 6 is for those who cherish the make and design of a smartphone rather than what’s on the inside and you can buy the same if you’re content what you’d get in terms of imaging.