Nokia 5.3 Android 11 update has been rolled out by HMD Global. The phone was launched with Android 10 operating system last year.

HMD Global has now rolled out the Android 11 update for Nokia 5.3. To recall, the phone was launched with the Android 10 operating system last year.

The update has been announced by a company official in an official Nokia community post. The post says that the Android 11 update for the Nokia 5.3 will be rolled out in waves.

The first wave of roll out comes in 13 countries which also includes India. More regions will be added in the coming weeks.

According to Nokia, the update will be rolled out to 30 percent of the users initially, 50 percent will get the update by August 5. By August 6, all of these markets will have received the update.

The phone comes with a 6.55-inch HD+ display with a resolution of 1600 x 720 pixels. there is also 2.5D curved glass, 268ppi pixel density, 450 nits brightness and a 20:9 aspect ratio. The smartphone is powered by the Snapdragon 665 chipset paired with up to 6GB RAM and 64GB internal storage. The handset packs a 4,000mAh battery and supports 10W charging.

The phone packs a quad-rear camera setup with a combination of a 13-megapixel primary lens with f/1.8 aperture. There is also a 5-megapixel wide-angle lens, a 2-megapixel depth sensor and a 2-megapixel macro shooter. For the front, there is an 8-megapixel selfie shooter. 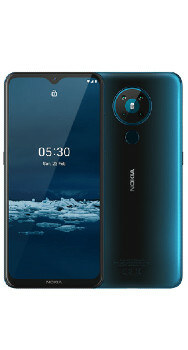