Nokia 3.4 is expected to be announced in September at IFA 2020 conference in Berlin next month, alongside the Nokia 2.4.

HMD Global is all set to launch several Nokia phones later this year, ranging from a premium Nokia 9.3 PureView to a mid-range Nokia 7.3 5G. One of the upcoming HMD Global phones will be Nokia 3.4. Now Nokia 3.4 has been spotted on Geekbench benchmarking website.

As per the Geekbench listing, Nokia 3.4 is codenamed Dr Strange and will be powered by Qualcomm Snapdragon 460 processor coupled with 3GB of RAM. The phone will run on Android 10 out-of-the-box. 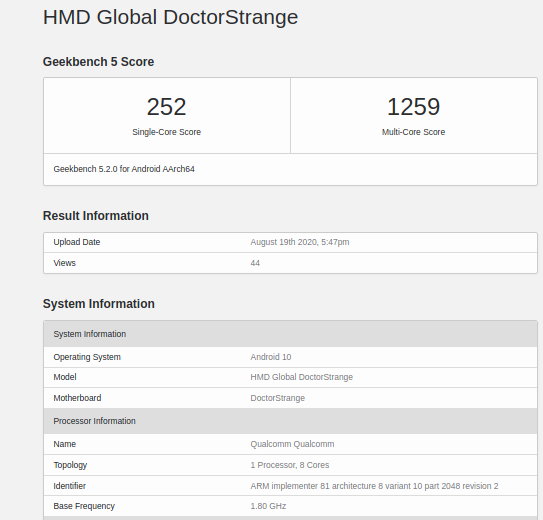 Talking of the scores, the device received 252 points in single-core tests and 1,259 points in multi-core tests. Nokia 3.4 is expected to be announced in September at IFA 2020 conference in Berlin next month, alongside the Nokia 2.4. However, HMD Global has not officially announced any launch date for the same.

HMD Global is also said to unveil the Nokia 7.3 5G smartphone in September at IFA Berlin 2020. Yesterday, Nokia 7.3 5G was spotted on the set of the upcoming James Bond movie No Time To Die. After Nokia 8.3 5G, Nokia 7.3 will be HMD Global’s next 5G phone. The device is touted to emerge as the cheapest 5G smartphone from Nokia.

Meanwhile, Nokia 5.3 will be launching in India on August 25. HMD Global has already sent out press invites for a media briefing on August 25. The invite reveals it will be a virtual briefing session ahead of their product announcements. The invite suggests that there could be more than one Nokia phone.

To recall, Nokia 5.3 was launched earlier this year along with Nokia 8.3 5G.The key features of the phone include a Qualcomm Snapdragon 665 SoC, 13-megapixel quad rear camera setup and 4,000mAh battery.