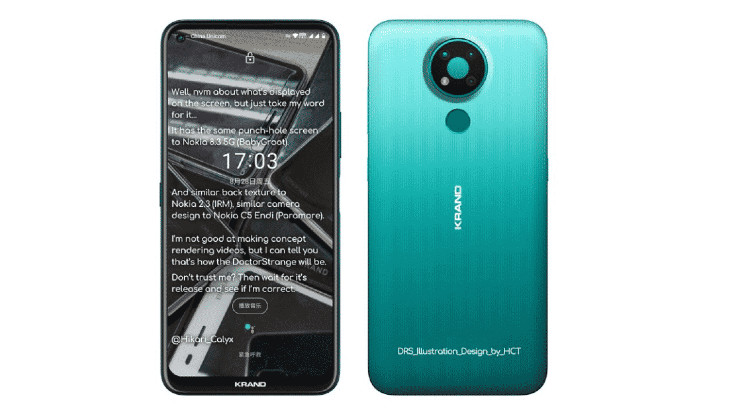 HMD Global is expected to announce a bunch of new phones like Nokia 2.4, Nokia 3.4, Nokia 6.3, and Nokia 7.3. Now the Nokia 3.4 specifications and price has leaked online.

The phone will be powered by 2.0GHz octa-core Snapdragon 460 processor coupled with up to 3GB of RAM and up to 64 GB of storage. The device will come with a microSD card slot for additional storage.

For the cameras, the Nokia 3.4 will come with a triple camera system with 13-megapixel + 5-megapixel + 2-megapixel. There will be a front-facing camera of 8-megapixel.

Nokia 3.4 will pack a 4,000mAh battery and will come preinstalled with Android 10 OS. It is likely to come with a rear-facing fingerprint sensor as well.

As per earlier renders leaked, the smartphone will feature a similar design as seen with Nokia C5 Endi. However, the Nokia 3.4 will come with a punch-hole design. The back panel comes with a triple-camera setup with a circular camera module and just beneath it, you will find a fingerprint sensor and Nokia logo. The right side features volume controls and a power on/off button.