The Nokia 2 is said to be cheaper than the Nokia 3, which currently retails in India for Rs 9,499.

After launching Nokia 8, seems like Nokia is getting ready for the launch of its Nokia 2 smartphone soon in the United States. As per the reports, the device has been spotted on Federal Communications Commission (FCC) that regulates interstate and international communications by radio, television, wire, satellite and cable in the US. The Nokia 2 is said to be cheaper than the Nokia 3, which currently retails in India for Rs 9,499.

The FCC document was first spotted by popular leakster Roland Quandt and the listing has revealed the information about the battery of the device model number TA-1029. As per the document, Nokia 2 will be featuring a massive 4,000 mAh battery, which is the largest battery on any Nokia Android device made by HMD until now. The battery should be able to last for two days on a single charge. However, earlier rumours revealed that the Nokia 2 will come with 2800mAh battery. 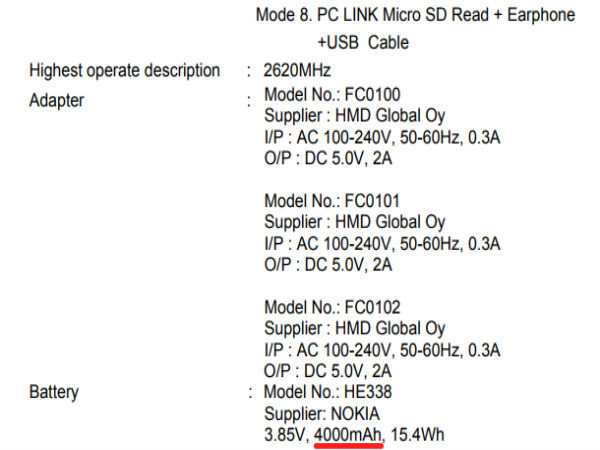 The smartphone was earlier also spotted on FCC website and a few photos of the device were also leaked alongside. An earlier FCC hinted that there could be four variants of the Nokia 2 namely TA-1023, TA-1035, TA-1007 and TA-1029. The TA-1023 and variants varinats features a single SIM connectivity while the TA-1035 and TA-1029 are dual-SIM variants. A new report has revealed that HMD Global has enabled LTE band 5 on TA-1035 and TA-1023 variants of the Nokia 2.

Nokia 2 has earlier appeared on GeekBench benchmarking website. The listing revealed that the smartphone will run on Android 7.1.1 Nougat and it will be powered by a quad-core processor clocked at 1.27GHz. However, the listing did not revealed the processor make, but many speculate that this could be Qualcomm Snapdragon 212 chipset. Further, the phone is reported to come with a 1GB of RAM. There is no information about the display, battery and other details at the moment.