BlackBerry's patent filing of a BlackBerry device with variable angular orientation keyboard hints at a probable device in the near future.

BlackBerry has introduced the BlackBerry Q10 and BlackBerry Q5 smartphones with full Qwerty keyboards. These two BlackBerry 10 OS devices are already available in the market. The next Qwerty device would be different from the usual candy bar design. A BlackBerry patent filing spotted by N4bb reveals a Storable Keyboard having variable angular orientations.

The patent filing reveals that a keyboard moves between a stored position inside the housing and a deployed position. Quite similar to what we do with a Matchbox – slide out the box that carries the matches. A similar mechanism appears to have been used for the angular keyboard. From the figure one can judge that the device will also have a large touchscreen display and the slider keyboard would be an add on. 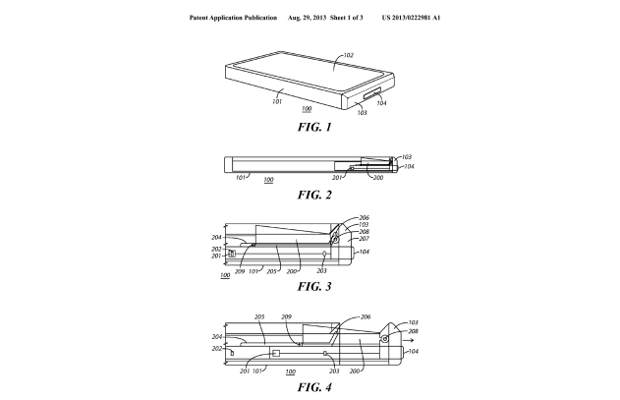 Dell has introduced a large screen device with slider Qwerty keyboard – Venue Pro. Unfortunately, the phone did not work but the view will remain similar for the BlackBerry Slider. The slider panel will retract into the phone’s housing panel to make it usable as a touchscreen only device.

The patent further shows images of how the angular keyboard will be controlled using different mechanics inside the body of the device.

From the patent publication date, one can expect this device to surface only by early next year.