A new HTC smartphone has appeared on GeekBench benchmarking website. The smartphone comes with the model name ‘HTC 2Q7A100’. The listing throws light on some of the expected specifications of the upcoming smartphone.

In the GeekBench listing, the HTC 2Q7A100 has 6GB RAM and Qualcomm Snapdragon 710 octa-core chipset clocked at 1.71GHz. There is no information available on the identity of the smartphone. It may either end up as a Desire series smartphone or a U series phone. 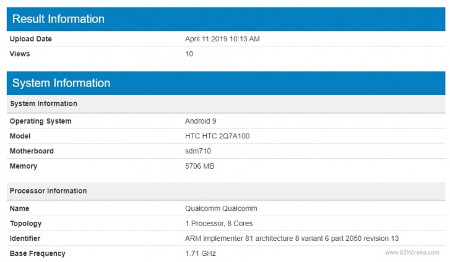 The listing shows that the phone will run Android 9 Pie operating system. Sadly, the listing does not reveal any other details like its camera setup or the display of this smartphone.

As of now, there is no information about the detailed specs and availability of the device. But since the phone has now been spotted GeekBench, we expect to soon see some new leaks for more details as well. Stay tuned to our website for the same.

Meanwhile, HTC has recently revealed that it will roll out Android 9.0 Pie update toHTC U11,HTC U11+ andU12+ starting from Q2 2019. Apart from these phones, HTC has already released Android 9 Pie update to HTC U11 Life Android One edition in November 2018.