Motorola One was launched in September this year as an Android One device.

According to XDA-Developers, the update is currently rolling out in Mexico and expected to be rolled to other regions as well in future. 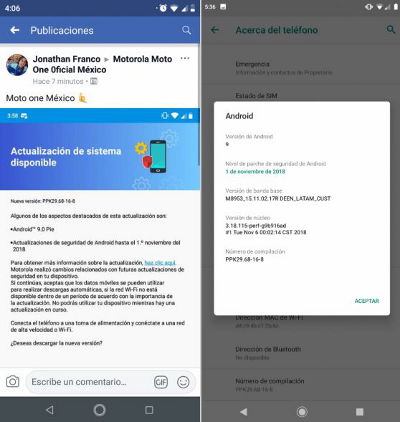 The Pie update will bring features like Adaptive Battery, Adaptive Brightness a new multitasking UI, and a new navigation. Alongside, the update also brings November’s security patch to the device.

To recall, the Motorola One was launched in September this year as an Android One device. It features 5.9-inch HD+ display with a resolution of 1520 x 720 pixels and 18.5:9 aspect ratio. The device is powered by a 2GHz Octa-Core Snapdragon 625 chip with Adreno 506 GPU. The phone has 4GB RAM and 64GB internal storage. There is a dual rear camera setup with a 13-megapixel with f/2.0 aperture lens combined with a secondary 2-megapixel (f/2.4) lens for depth sensing. There is a front camera of 8-megapixel sensor and the phone is backed by a 3,000mAh battery.