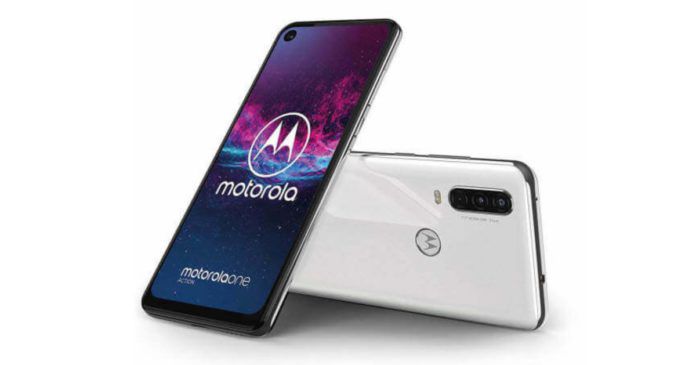 Motorola One Action runs on Android 9.0 (Pie) and is part of the Android One program.

Motorola has announced Motorola One Action in Brazil. The phone is priced at€259 (Rs 20,415 approx.) for the sole variant with 4GB of RAM and 128GB of storage. It is now available in Europe, Brazil and Mexico. The phone is available in two colour options – Denim Blue and Pearl White.

Motorola has scheduled an event in India on August 23 in which the company will launch Motorola One Action. The phone will be available on Flipkart upon its launch in India as the e-commerce website is teasing the upcoming launch on its portal.

The Motorola One Action features a 6.3-inch (1080×2520 pixels) Full HD+ LCD with 21:9 aspect ratio and a screen-to-body ratio of 84 percent. It is powered by 2.2 GHz Octa-Core Exynos 9609 processor coupled with 4GB of RAM and 128GB of storage, which can be further expanded up to 512GB via micro sd card slot. The phone features a rear-mounted fingerprint scanner

Motorola One Action runs on Android 9.0 (Pie) and is part of the Android One program. It is fueled by 3500mAh battery with 10W charging. Connectivity options includeDual 4G VoLTE, WiFi 802.11 ac (2.4GHz + 5GHz), Bluetooth 5, GPS + GLONASS, NFC, USB Type-C,3.5mm audio jack and FM radio. The handset measures160.1 x 71.2 x 9.15mm and it weighs 176 grams. The device has IPX2 certification for water and dust resistance, and a Dolby Audio supported speaker.