Motorola will be holding an event on July 25 in New York City where it is expected to launch Moto Z2, along with a slew of Moto Mods. The brand is also reported to unveil the Moto X4 smartphone as well.
The brand has started sending out the invite to the members of the press with a hashtag #HelloMotoWorld. There is a colourful animated image which notes “You won’t want to miss this” as a tunnel lights up with different colours. Though the brand has not given a hint about the launch, it is highly rumoured that might launch the Moto Z2 aka Moto Z2 Force with some new Moto Mods or the Moto X4, which has been subjected to various leaks in the past. 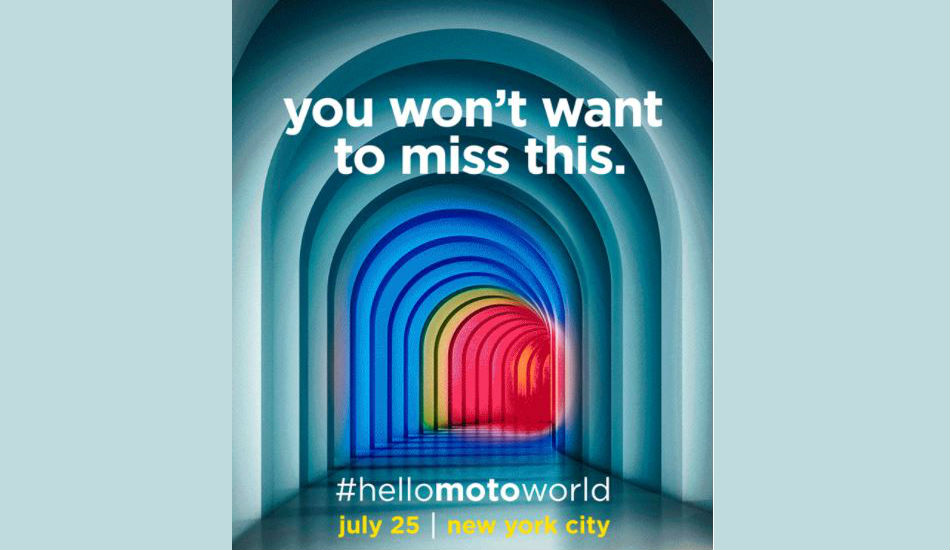 Interestingly, multiple reports suggest that both the smartphone could come with dual rear cameras. The Moto Z2 or Z2 Force was earlier listed on GFXBench, which revealed some key specifications of the device. According to the benchmarking website, the smartphone will come with a 5.5-inch Quad HD display, octa-core Qualcomm Snapdragon 835 SoC, Adreno 540 GPU, 4GB of RAM, 64GB of internal storage, 12-megapixel rear camera, a 5-megapixel front shooter, and Android 7.1.1 Nougat. On the connectivity front, it will support WiFi, GPS, Bluetooth, and NFC as well. Coming to the sensors, Moto Z2 will include Accelerometer, Barometer, Compass, Gyroscope, Light sensor, Pedometer, and Proximity sensor.
You might be interested in watching this:
Coming to the Moto X4, the phone is reported to boast an aluminium body and it will come with an IP68 certification, which makes it water and dust resistant. On the specification front, the phone is reported to come with a 5.2-inch full HD display, octa-core Qualcomm Snapdragon 630 chipset, 4GB of RAM, 64GB of internal storage, 12MP + 8MP dual rear cameras, 16MP front shooter, Android 7.1.1, 3,000mAh battery, Turbocharging, 4G VoLTE, Wi-Fi, Bluetooth 5.0 and Dual SIM support.