The device is bundled with an Aircel SIM card. It comes with a 2 GB microSD card at a best buy price of nearly Rs 14,000.

Motorola has announced the launch of its Charm smartphone in India. The device is powered by Android 2.1 and has a 2.8 inch TFT touchscreen along with a Qwerty keypad.
“Motorola strives to excite the Indian consumer with three way navigation capability – touch screen, Qwerty keyboard and the backtrack, which make messaging, browsing and social networking fast and easy,” said Faisal Siddiqui, country head of India, Motorola Mobility.
The backtrack navigation pad, located directly behind the home screen on the smartphone’s back is similar to a laptop touch panel and enables an unobstructed view of the screen by allowing the device to be controlled from the back of the phone.
Other features of the Motorola Charm include a 3 megapixel camera, WiFi, Bluetooth, A-GPS, FM radio etc. 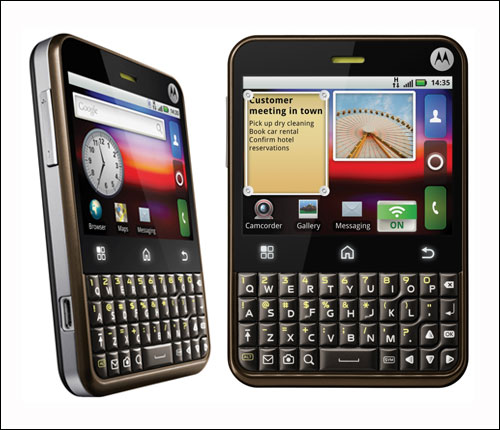 The device is bundled with an Aircel SIM card. It comes with a 2 GB microSD card at a best buy price of nearly Rs 14,000.
Aircel pre paid users also get up to 9 GB worth of downloads over 3 months, along with 150 Aircel to Aircel local call minutes. To activate the offer, they are required to SMS ‘SMART PI’ to 54343 from their Aircel number.
On the other hand, Aircel post paid users can get up to 1 GB of data usage free every month for six months. Post paid users need to visit the Aircel store for activation.