The Motorola Edge 20 design and specifications have been tipped. The device could be powered by the Snapdragon 778G chipset 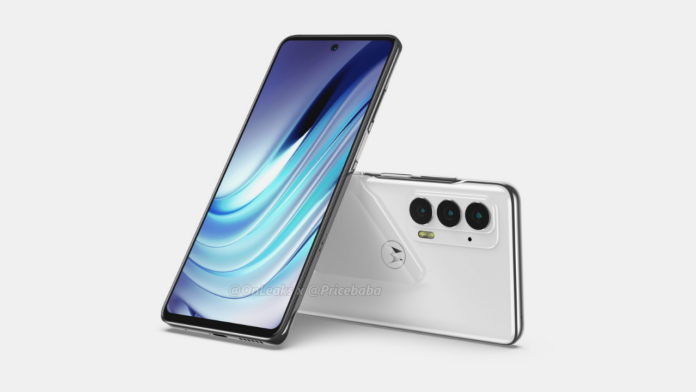 Motorola’s upcoming smartphone, the Edge 20, has now been confirmed to launch on August 5th in China. Ahead of the launch, we now have leaked renders for the device. These renders show off the design of the Motorola Edge 20 from every angle. Along with that, the key specifications of the upcoming Moto device have also been tipped.

The design and specs leak come from PriceBaba in collaboration with OnLeaks. As per the tipped design, the Motorola Edge 20 features a different design from its predecessor. It has a triple camera setup on the back along with a centred hole-punch front cam.

Dimension-wise, the Motorola Edge 20 will measure 169.1 x 75.5 x 8.9mm. The Speaker grille and USB Type-C port are placed at the bottom. The renders suggest the phone will come in white and blue colours, while this may change at the launch time.

The Motorola Edge 20 should sport a 6.7-inch full-HD+ (1,080×2,400 pixels) display with a 120Hz refresh rate. It can come with 6GB/8GB of RAM and 128GB or 256GB of storage. The three sensors on the back could include a 108-megapixel main sensor, 16-megapixel second sensor and an 8-megapixel tertiary lens. The Motorola Edge 20 is may pack a 4,000mAh battery. The smartphone is tipped to be powered by the Qualcomm Snapdragon 778G SoC.

Moto launched a new phone in early July this year. The new Motorola One 5G UW Ace, as the name suggests, is a better version of the One 5G Ace that was launched earlier this year. It features a 6.7-inch Full HD+ LTPS IPS LCD panel with a 2,400 x 1,080-pixel resolution, a 20:9 Max Vision aspect ratio, and a centred punch-hole at the top.