Yesterday it was reported that how someone bought the Moto Z4 smartphone on Amazon even before it is officially launched. Now the same phone has been spotted on the Geekbench benchmarking website, revealing some of its key specifications.

As per the GeekBench listing, Moto Z4 comes with Android 9.0 Pie out-of-the-box and it has 4GB of RAM. It will be powered by an octa-core Qualcomm SM6150 SoC which is the Snapdragon 675 chipset. The phone has scored 2346 points in the single-core test while in the multi-core test, the phone has received 6248 points. 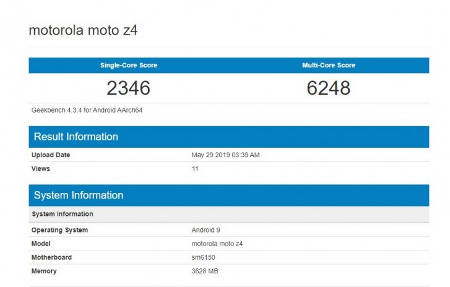 As per the Amazon listing, Moto Z4 features a 6.4-inch Full HD+ OLED FullVision display with a resolution of 2340 x 1080 pixels and an aspect ratio of 19:9. The phone comes with the Qualcomm Snapdragon 675 processor which is coupled with 4GB of RAM and 128GB of internal storage. This can be expanded up to 2TB with a microSD card.

Moto Z4 runs on Android 9.0 Pie and comes with a 3,600mAh battery with USB Type-C charging and 15W TurboPower charger. For optics, the phone features a single 48-megapixel sensor with a 12-megapixel output using Quad Pixel technology and a 25-megapixel front camera.

The Moto Z4 series will include flagship smartphones like the Moto Z4 and Moto Z4 Force. The Moto Z4 Force is likely to be powered by a Qualcomm Snapdragon 855 chipset coupled with 8GB of RAM. the phone will also reportedly feature triple rear cameras.

Moto Z4 sold by Amazon even before Motorola launched it