Motorola confirms an India launch for the Moto Z2 Play

The smartphone will be up for pre-booking starting from June 8.

Motorola is all set to launch the Moto Z2 Play in India. The smartphone will be up for pre-booking at a store near you starting from June 8. The confirmation comes straight from the company’s official Twitter account.
The tweet reads, “Bid Goodbye to a bulky phone & Say Hello to re-defined sleekness on the #MotoZ2Play!” The brand is also throwing in some interesting pre-booking offers to get buyers moving. To start with, there is a ‘Hello Finance’ through which one can pre-book the latest device for Rs 2,000 and can pay 10 monthly EMIs without any interest. The offer is only valid through Bajaj Finserv or Homecredit. Alternatively, one can also swipe his/her card and convert the payment into 3/6/9/12 months EMI without any interest at select stores. 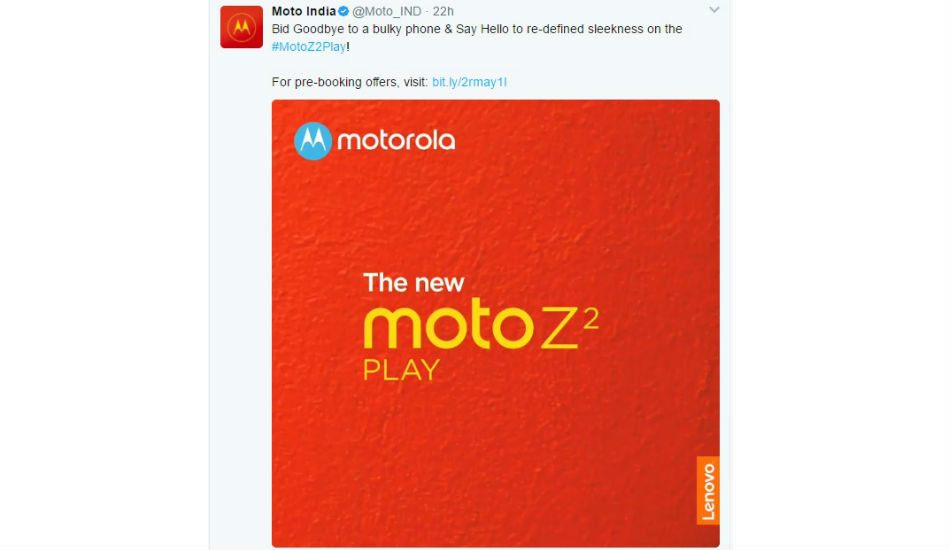 Other than this, the brand will offer some interesting offers on Select Moto Mods and will also introduce Moto Armor Pack, which comes loaded ‘with protective accessories to keep you worry-free’. To recall, the smartphone was launched recently in the US for $499 (approx. Rs 32,000) and comes in Lunar Grey and Fine Gold colour variants. The brand has also introduced new Moto Mods as well, however, it is still unknown whether the company will launch the latest Mods in India or not.
Jumping straight to the specifications, the Moto Z2 Play comes loaded with a 5.5-inch Full HD Super AMOLED display with a screen resolution of 1920 x 1080 pixels coupled with Corning Gorilla Glass 3 protection and a pixel density of 401 ppi. The device is powered by a Qualcomm Snapdragon 626 processor clocked at 2.2GHz. It comes in two RAM and storage variants: one with 3GB Ram and 32GB storage, while the other one sports a 4GB RAM and 64GB internal storage. The storage can be further expanded up to 2TB via micro SD card slot.
On the camera front, the device features a 12-megapixel rear camera with 1.4-micron pixels, f/1.7 aperture, dual LED flash and laser and dual autofocus lens. For the front, there is a 5-megapixel shooter with f/2.2 aperture, wide-angle lens and a front flash. The device runs on the latest Android 7.1.1 Nougat and is powered by a 3000mAh battery along with TurboPower charger.
On the connectivity front, it includes 4G LTE, Wi-Fi 802.11 a/g/b/n, Bluetooth 4.2, USB Type-C, headphone jack, NFC, FM radio, and GPS/ A-GPS.
Moto Mods
Motorola has also introduced four new Moto Mods along with the smartphones including JBL SoundBoost 2, Moto TurboPower Pack, Moto GamePad for $79.99 (around Rs 4,500) and Moto Style Shells with wireless charging for $39.99 (Aroound Rs 2,580). The JBL SoundBoost 2 is similar to the last year’s SoundBoost, however there some stark differences. First of all, the mod comes with a fabric covering and is splashproof. It comes with a 2 x 3V stereo speakers and has an extra 1000mAh battery.
The Moto TurboPower pack comes with a 3490mAh battery and has the ability to fast-charge the smartphone. Moving on to Moto GamePad, it basically turns your phone into a handheld gaming console. The mod has analogue joysticks, D-pad controls and a 1035mAh battery backup. Lastly, Moto Style Shells with wireless charging, as the name suggest, is back cover which supports wireless charging for Qi and PMA charging pad. It comes in power patterns.
Motorola has also said, that the new smartphone will also support last year’s Moto Mods as well. The new mods will be available in the market this summer.