The smartphone was launched last year in India with Android 6.0.1 Marshmallow operating system.

The Moto Z Play which was launched in India with Android Marshmallow last year has now been spotted on GeekBench benchmarking website with the Android Oreo operating system via PhoneArena. This simply implies that the company is perhaps testing the latest software and may release the same for the devices soon. It is to be noted that the company has already rolled out the Android 7.1.1 Nougat update for Moto Z Play in India this year. 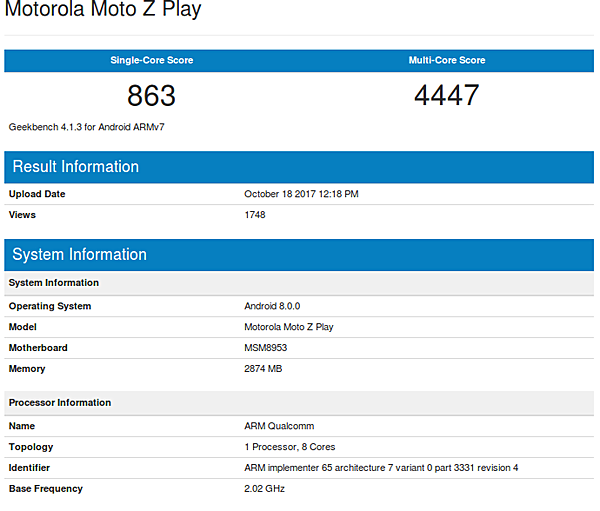 In the GeekBench listing, the Moto Z Play got 863 points in single-core test and in multi-core test it received 4447 points. As per the listing on Geekbench, the Moto Z Play has 3GB RAM and Qualcomm Snapdragon 821 quad-core processor clocked at 2.35 GHz. The handset is shown with the Android 8.0 Oreo operating system.

In addition to the Geekbench test, a screenshot allegedly reveals the “About phone” menu of the Moto Z Play which shows the presence of Android Oreo along with the December security patch. 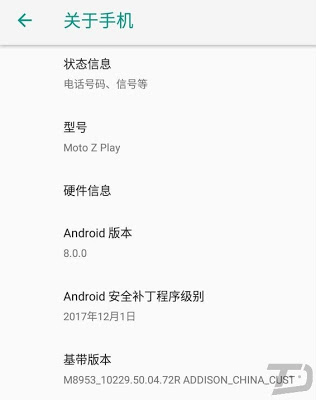 To recall, the Moto Z Play was launched in India back in October 2016 for Rs 24,999 along with the Moto Z smartphone. The smartphone comes with an aluminium frame and glass back wrapping a 5.5 inch full HD Super AMOLED display. Moto Z Play is packed with a 3510 mAh non-removable battery which promises up to 45 hours of battery life. It supports TurboPower charging technology as well through which one gets juice for up to 8 hours in just 15 minutes.

The smartphone has 32 GB of internal storage which is expandable up to a 2 TB via micro SD card. Now running on Android Nougat, the device is only 6.99 mm thick and comes with water repelling coating on its body. For connectivity, the device comes with dual SIM functionality and has Bluetooth 4.0 LE, WiFi (a/b/g/n), NFC, AGPS, USB Type-C port, 3.5 mm port etc. Being a device sporting a modular concept, it comes with Moto Mod connectors through which one can attach various Moto Mods. Apart from that, it sports 3 microphones, a fingerprint scanner, accelerometer, ambient light sensor, gyroscope, magnetometer, proximity, and audio monitor.