It is a well-known fact that Motorola is working on the upcoming Moto X4 smartphone. The phone was earlier reported to be launched alongside Moto Z2 Force, but that didn’t happen. Now, the device has paid a visit on Geekbench revealing some key specifications.
According to the listing, the smartphone will bear a model number ‘XT1789-05’ and it runs on Android 7.1.1 Nougat.The phone has scored 824 in single-core test and 3886 in a multi-score test. The device will be powered by the latest Qualcomm Snapdragon 660 processor, which comes with eight cores and is clocked at 2.21GHz. This contradicts previous reports that suggest a Qualcomm Snapdragon 630 processor. The phone will be backed by a 3GB of RAM, the listing further reveals. 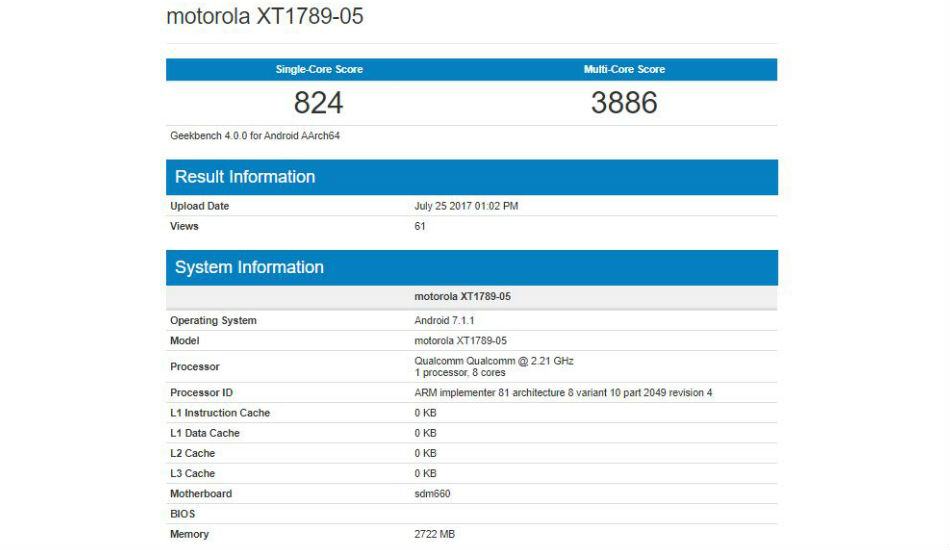 However, the Geekbench listing does not reveal anything about the camera, battery and other details. However, some previous rumours indict that the phone will sport a dual-camera setup at the rear panel. According to a recent report, the dual rear cameras will come with a combination of 12-megapixel and 8-megapixel sensors. For the front, there will be a 16-megapixel selfie camera.
You might also like this:
On the display front, the Moto X4 is reported to sport a 5.2-inch Full HD display with a screen resolution of 1920 x 1080 pixels. It was rumoured that it will sport a 4GB of RAM and 64GB of internal storage. The memory could be further expanded via micro SD card slot. The phone will be juiced up by a 3000mAh battery. It will also don an IP68 certification, which will make it water and dust resistant.