The Motorola Tab G20 has now been leaked and the device could launch on September 30 in India. It may be powered by the Helio P22T chipset. 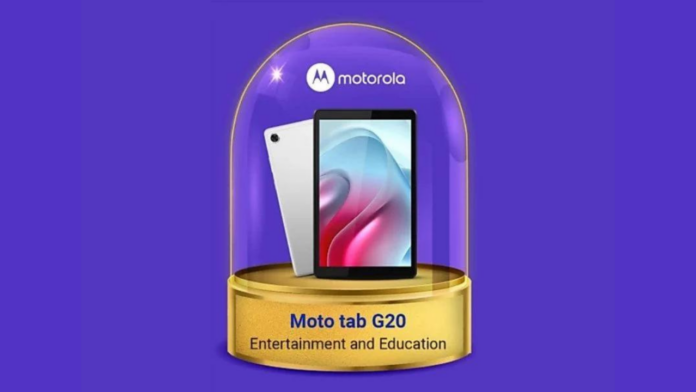 Motorola is all set to launch a new Tablet in India and the tablet should be called the Moto Tab G20. We now also have a speculative release date for the tablet which seems to September 30.

The tip comes from Mukul Sharma on Twitter as per whom Motorola will launch the tablet at the end of this month. This tablet was spotted as Moto Tab 8 on Flipkart last week but it looks like it has been renamed to Tab G20 now.

As per the render shown on Flipkart, the Tab G20 has thick bezels and a single camera on the back. Tipster Yogesh says that it will be a Tab A7 Lite competitor. He also shared a set of specifications for the device which are as follows.

The Moto Tab G20 should feature an 8-inch IPS panel with an HD resolution. It will be powered by the Helio P22T SoC coupled with 3GB of RAM. The tablet offers 32GB of storage and will run on stock Android 11 OS.

It has a 5-megapixel rear camera and a 2-megapixel front facing sensor. The device will be backed by a 5,100mAh battery with 10W charging support. Additional and connectivity features include front-facing speakers, Wi-Fi, Bluetooth 5.0, USB-C port, and a 3.5mm audio jack.

The Tab G20 appears to be a rebranded version of the Lenovo Tab M8 (Gen. 3). The pricing of the tab is yet to be revealed.

In recent news related to Motorola, the upcoming Moto E40 has been spotted in leaks. The Motorola Moto E40 should sport a triple rear camera setup with a 48-megapixel primary sensor. Additionally, the Moto E40 will reportedly come with a 6.5-inch HD+ Max Vision display with a 90Hz refresh rate.