Motorola is all set to unveil its latest foldable next week. 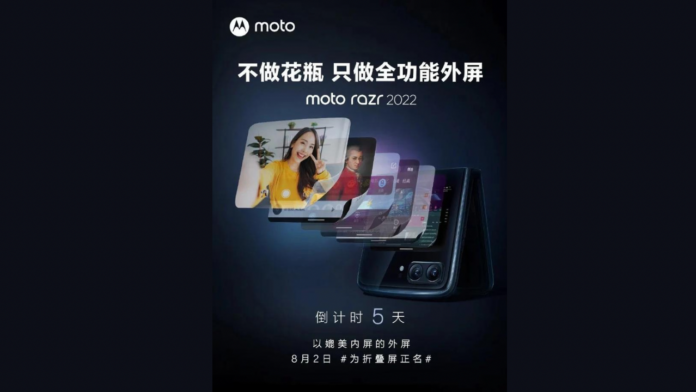 Motorola is all set to unveil its new foldable on August 2 and ahead of the launch, the company has officially the given us a first look at the design of the Moto Razr 2022 in the folded form. Apart from that, the device has been confirmed to be powered by the Snapdragon 8+ Gen 1 processor.

Motorola posted a teaser on Weibo which shows us the Moto Razr 2022 design in its clamshell form factor. It can be seen having a decently sized screen on the front alongside the dual camera setup. It seems similar to what Samsung does with the Galaxy Z Flip but the external display looks comparatively bigger.

The teaser also confirms that the display can be used as a viewfinder so one can click selfies using the rear camera. Motorola has already confirmed that the device will be powered by the latest Snapdragon 8+ Gen 1 processor. It will pack a 3,500mAh battery that is claimed to last a full day on a single charge.

As per rumours, Motorola Razr 2022 will feature 6.7-inch P-OLED FHD+ foldable screen with a 120Hz refresh rate. The cover screen will likely have a 3-inch size. For optics, there will be a 50-megapixel primary sensor and a 13-megapixel ultra-wide sensor. On the front side, there will be a 32-megapixel shooter for taking selfies and video calling.

The phone should come with up to 12GB of LPDDR5 RAM and up to 512GB of UFS 3.1 internal storage. It will run the Android 12 operating system out-of-the-box based on company’s own MyUI 4.0 custom interface.