Moto G5 vs Nokia 5: Which number 5 would you choose? 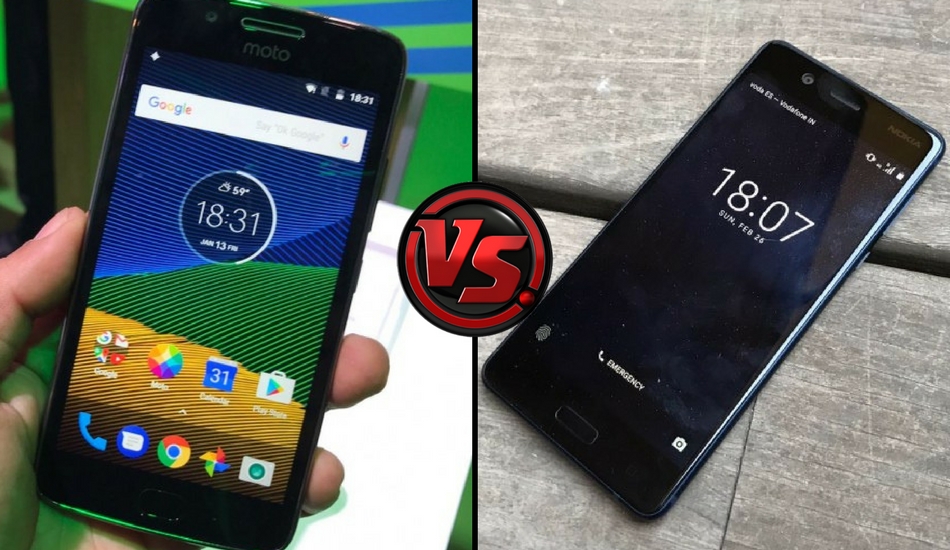 Looking at the specifications, the Moto G5 and Nokia 5 come really close and we thought why not put them one on one against each other and sort the verdict.

Lenovo is all set to launch its Moto G5 Plus on 15th March in India. While we are not aware if the company will also unveil the Moto G5 as well, the younger sibling of the two will definitely come with a cheaper price tag. Meanwhile, Nokia is also expected to hit the Indian shores shortly after it unveiled three smartphones at the Mobile World Congress. Looking at the specifications, the Moto G5 and Nokia 5 come really close and we thought why not put them one on one against each other and sort the verdict. Let’s find out if Nokia 3 can stand against the likes of Moto G5 which is the successor to probably one of the most successful budgets oriented android smartphones.

Design and Display
When it enters the Indian market, Nokia will be relying a lot on the design and brand value. When we talk about the design and the overall build quality, Nokia 5 resembles a lot to the Nokia 6 with a metal unibody shell layer with a matte finish up top. Unlike the Nokia 6, the edges on the Nokia 5 is curved which makes it much more comfortable in the hands. The device comes in four colour options such as Tempered Blue, Silver, Matte Black and Copper. We get the power button and volume rockers on the right with two SIM trays on the left. At the top, we have the 3.5 mm headphone jack and at the bottom, we get the microUSB port for charging and data transferring along with the primary microphone and speaker grill. Overall, Nokia 5 borrows a pretty solid ergonomics from the Nokia 6 which is an impressive piece of hardware in itself. 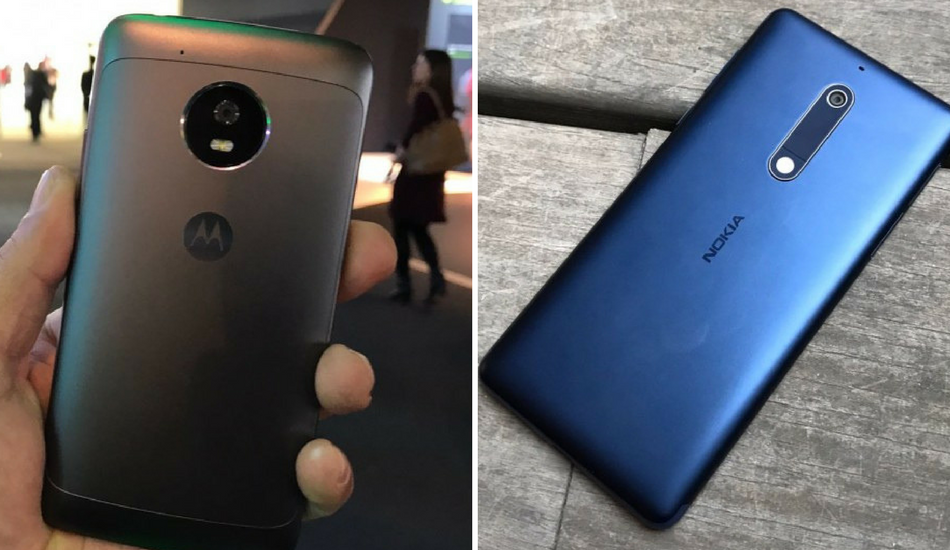 On the other hand, the Moto G5 resembles a lot to the Moto G5 Plus. The device comes with an aluminium shell this time, unlike the textured back panel we saw last year in Moto G4. The back of the device is curved and we get Moto Z-like smartphone setup at the back this time. The power button and the volume keys are on the right while the SIM tray is located on the left. The microUSB port is situated at the bottom and up top, we get the 3.5 mm headphone jack. In terms of design, the Moto G5 and Nokia 5 hits their own good points and live up to the expectations. So you will not be much disappointed in this area as both these smartphones are backed with some solid aesthetics.

Coming to the display, things tend to shift in favour of Moto G5 just a bit. While the Nokia 5 comes with a 5.2-inch 2.5D curved HD IPS LCD display with a resolution of 720×1280 pixels, the Moto G5 stands strong with its 5-inch Full HD (1920 x 1080 pixels) resolution. Overall, you will not find much difference but the display on the Moto G5 will certainly offer more pixel density and better relative quality. So this one is surely taken by the Moto G5.

Budget smartphones these days are ramping up their performance game and players like Moto (read Lenovo) and Nokia will have to be at least on par with the industry standards to have a distinctive value for their products. Starting with the Moto G5, the device is powered by a 1.4 GHz Qualcomm Snapdragon 430 processor coupled with Adreno 505 GPU. The phone is backed by a 2GB of RAM and an option of 16GB and 32GB internal storage which can be further expanded up to 128GB via microSD card slot. 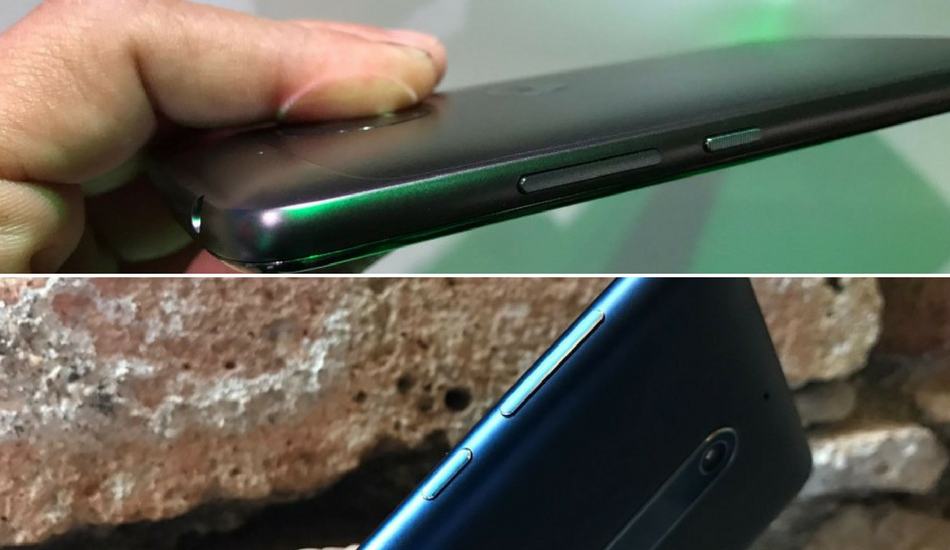 On the other hand, Nokia 5 is powered by a 1.4GHz Octa-Core Qualcomm Snapdragon 430 processor, paired with Qualcomm Adreno 505 GPU. For the memory, we have 2GB of RAM and 16GB of internal storage which is expandable up to 128GB via microSD card. 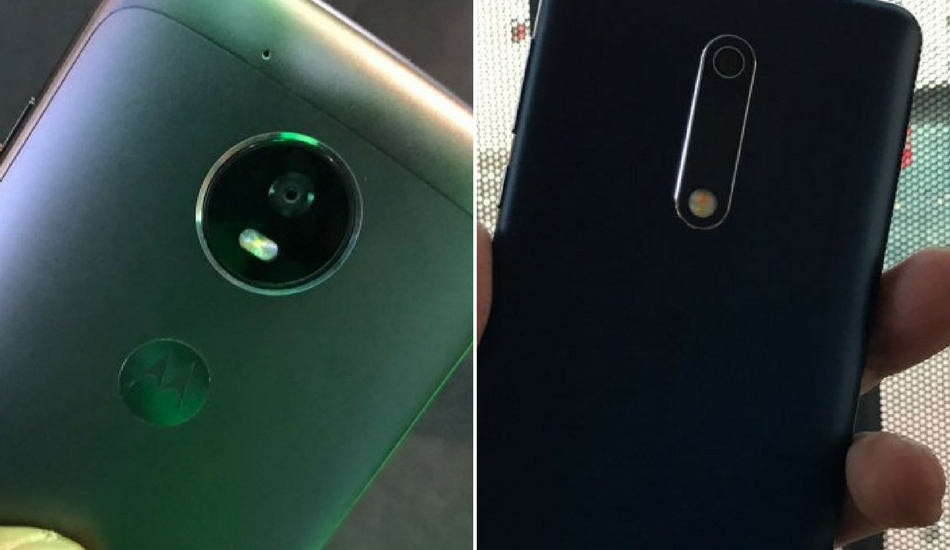 Now based on the megapixels, Nokia 5 might have an upper hand with its 8-megapixel front facing camera sensor. However, megapixels never reveals the entire story, in fact, it is just a number. What matters is the image processing and the camera sensor used inside the device which is what will decide who, amongst these two, comes out as the winner. We haven’t tested the cameras on both the devices, as of now, so it is too early to comment on the performance. Nevertheless, we would request you to stay tuned on our portal to get a detailed camera comparison.

Coming to the battery, Moto G5 falls slightly short of Nokia 5 with a 2800 mAh battery in comparison to 3000 mAh on the Nokia 5. However, the one on the Moto G5 is removable which is a rare breed in smartphone space these days. As a final verdict, I would go with the Moto G5 in this one just because of its removable battery even though I will lose a bit of the overall battery life.

Lastly, for the connectivity, both the devices come with built-in Wi-Fi 802.11 a/b/g/n, dual-band, WiFi Direct, hotspot, Bluetooth v4.2, GPS, microUSB 2.0 etc. Both the devices also sport a fingerprint scanner on the front and sports all kinds of basic sensors. However, Nokia 5 comes with NFC (Near Field Communication) while Moto G5 skips this one.

Now, this is where things get really interesting. On one hand, Moto G5 comes with a better display and removable battery, Nokia 5 comes with a bigger battery capacity and the brand value that Nokia has always been known for. To choose between the two we definitely have to nit pick because there are no major differences. Both the smartphones are yet to hit the Indian market and prices of both of them hasn’t been out yet which is where I think will most of the decisions would take place. Till then, Nokia 5 and Moto G5 looks promising and would compete directly with the likes of Redmi 3S prime which is priced at Rs 8,999.