Moto C Plus with Android Nougat to launch in India soon

Earlier this month, we have seen the launch of Moto C in India for Rs 5,999. Now Motorola is all set to launch its another new smartphone in India, named as Moto C Plus. The company has started teasing the launch of the upcoming smartphone on its official Twitter handle.

“Yes, it’ll give you the latest, clean and customizable smartphone experience. Yes, it’s THAT cool! #MotoCPlus #ComingSoon” reads the company’s latest tweet. Along with the tweet, the company has also shared a video for the said device. 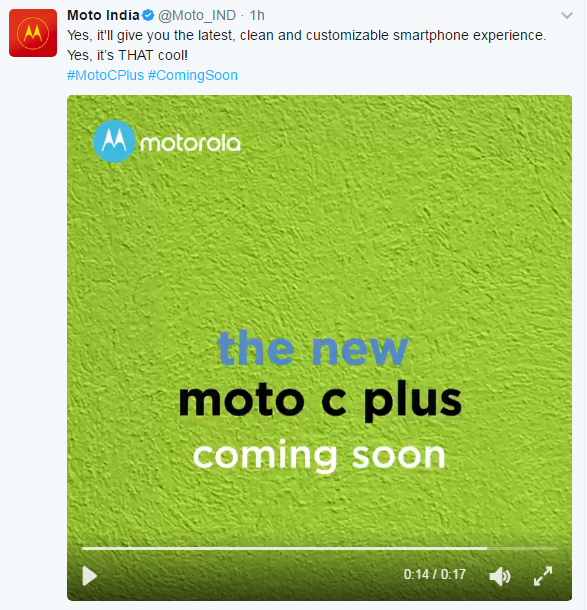 Moto C Plus was first unveiled last month alongwith Moto C smartphone at a price tag of EUR 119. The Moto C Plus features a 5-inch HD display and is powered by a quad-core MediaTek MT6737 processor along with Mali-T720 GPU. The phone is backed by a 1GB/2GB of RAM and has a 16GB of internal storage, which can be further expanded up to 32GB via microSD card slot.

On the camera front, the device sports an 8-megapixel rear camera with LED flash, aperture f/2.2 and 2-megapixel front-facing camera for selfies and video calling. The phone runs on the latest Android 7.0 Nougat and comes loaded with an impressive 4000mAh battery. On the connectivity front, it supports 4G VoLTE, WiFi 802.11 b/g/n, Bluetooth 4.2, GPS and micro USB port. It measures 144x 72.3x 10 mm and weighs 162 grams.

As of now, the launch date ofMoto C Plus is not revealed but we will keep you posted once we get more updates on this.