According to a Twitter user, the Windows Phone 8 running HTC 8X smartphone will have a 4.3-inch display and dual-core mobile processor inside.

More details of HTC 8X, which is expected to be announced any time soon, has now pouring in. Now the specifications of the upcoming HTC 8X (Accord) with Windows Phone 8 were shared on Twitter by Football4PDA, an enthusiast developer. Football4PDA also shared a press image of the HTC 8X and noted that the launch event is scheduled on September 19 this month.

Earlier, as The Mobile Indian had also rreported, it came to light that HTC is working to introduce a new Windows Phone 8 based smartphone dubbed as HTC 8X and nicknamed Accord. Now the image of HTC 8X’s official specifications in a way confirm what is in store for the consumers. 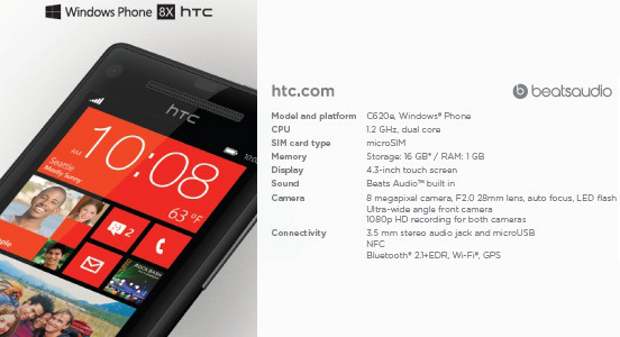 The HTC 8X is expected to come with a 4.3-inch touch screen display and will house a dual-core 1.2 GHz mobile processor and here we assume this too is one of the Qualcomm Snapdragon S4 mobile chip. To power the Windows Phone 8 mobile operating system, HTC has added 1 GB RAM.

HTC has tried to make an interesting improvement in the camera with f/2.0 aperture and 28mm lens bearing 8 megapixel image sensor at the back. This rear camera has auto focus and LED Flash making it capable of recording full 1080p HD at 30 frames per second. In the front rests an ultra-wide angle camera for video chat. Other features include GPS, WiFi, Bluetooth 2.1+EDR, and NFC.

The HTC 8X is expected to be launched with other devices codenamed as HTC Rio and HTC Zenith.