As per the listing on GFXBench, Micromax HS3 has a 5.1-inch display that has 1440×720 pixels resolution with an aspect ratio of 18:9 similar which is same as seen on the Micromax Canvas Infinity and 5 finger gesture support. Besides as per the listing, it has Qualcomm Snapdragon 430 or the Snapdragon 435 1.4GHz octa-core processor with Adreno 505 GPU. The smartphone has 4GB RAM and 32 internal storage out of which 23GB is reserved for users. The Micromax HS3 runs on Android 7.1.2 Nougat operating system. In the listing, there is no information about its battery or expandable memory. 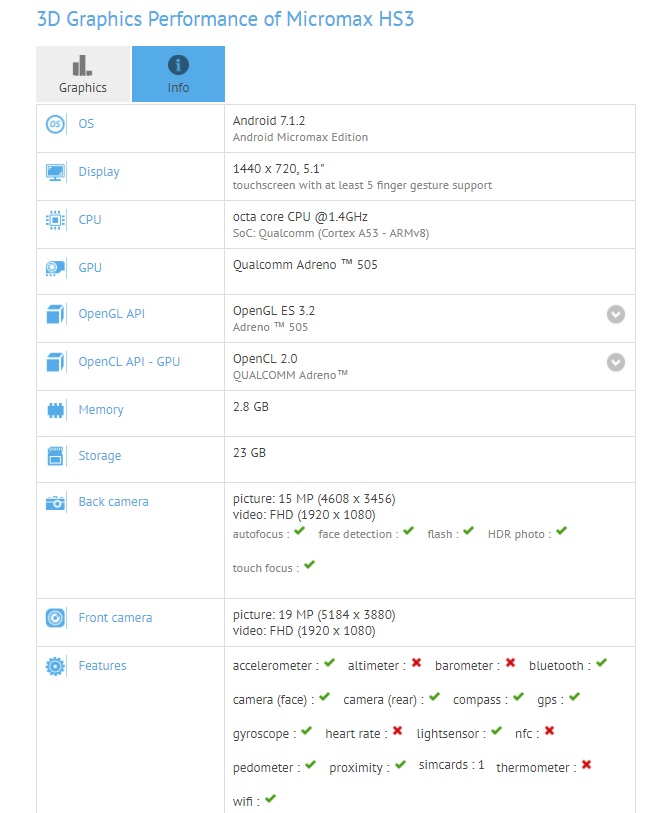 Further, the Micromax HS3 is listed with 16-megapixel autofocus camera and a LED flash in its rear panel. There is a 20-megapixel camera in its front for selfies. The GFX listing shows that the device has connectivity features like Bluetooth, GPS, NFC and WiFi. As per the listing, the device has an accelerometer, gyroscope, light sensor and proximity sensor as well.

To recollect some key specifications, Micromax Canvas Infinity features a metal frame with a removable back and comes loaded with a 5.7-inch HD IPS display. Unlike other HD screen resolutions, this one comes with 1440 x 720 pixels and boasts an aspect ratio of 18:9. The device is powered by an older Qualcomm Snapdragon 425 processor along with 3GB of RAM and 32GB of internal storage. The storage is further expanded up to 128GB via microSD card slot. The device also comes with a rear-mounted fingerprint sensor.

The major highlight of the device is that it sports an aspect ratio of 18:9. Interestingly, Micromax becomes the first Indian smartphone manufacturer to adopt the new aspect ratio.

On the software side, it runs on Android 7.1.1 Nougat with company’s UI running on top of it. Micromax has also added some nifty features like Smart Action through which users can wake and lock screen by double tap, flip to mute or snooze alarm, call a contact by placing the phone close to ear and more. The company has also promised to update to Android O also. On the camera front, the device sports a 13-megapixel rear camera with aperture f/2.0, 1.12-micron pixel size, an 81.5-degree field of view, 5P lens and LED flash. For the front, there is a 16-megapixel shooter for selfies and video calling.

On the battery front, the Micromax Canvas Infinity packs a 2900mAh backup. On the connectivity front, it offers 4G VoLTE, WiFi 802.11 b/g/n, Bluetooth, GPS, AGPS, dual-SIM, and micro USB port. As for the sensors are concerned, it comes with gravity, proximity, light, accelerometer and magnetic sensors.