Micromax recently shared a teaser video of its upcoming Micromax Evok Dual Note smartphone on its social media handle including Facebook and Twitter. Now today again, Micromax has shared a teaser on its social media platforms including Facebook and Twitter confirming the dual camera setup in the smartphone. Moreover, the post also confirms the availability of the device exclusively on Flipkart. But sadly the post does not reveal the exact date of launch of Evok Dual Note. 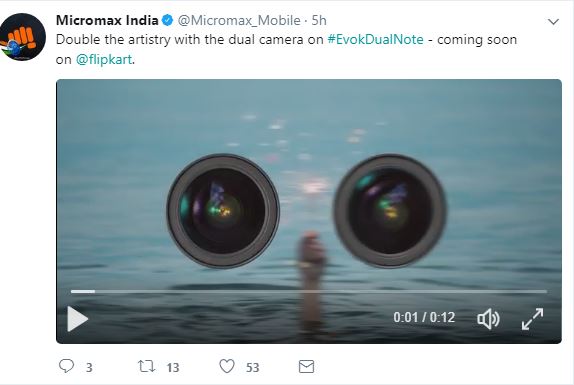 The earlier 11-second video teaser showed a pixelated image which later turns into a clear image of a parachute in the sky. The company’s tweet says “Do you measure your moments in pixels? #EvokDualNote, coming soon. Stay tuned!”. This hints at a camera-oriented phone and the company might launch a new variant of its recently launched Evok Note. Also, the Dual word in the name suggests that the device might feature dual camera setup as well. To recall, Micromax launched Evok Note smartphone in India in April this year.

Micromax launched Micromax Dual 5 this year for Rs 24,999 which was its first dual rear camera having two 13-megapixel sensors. If the Micromax Evok Dual Note really comes with dual camera setup, then the smartphone will face stiff competition from the recently-launched Lenovo K8 Note, last year’s Honor 6X and this year’s Coolpad Cool 1 Dual which are already in the market offering dual cameras under Rs 15,000.

Meanwhile, Micromax Canvas Infinity with 18:9 aspect ratio set is confirmed to launch in India on August 22.

Coming to the Evok Note smartphone, it boasts a metal design and comes loaded with 5.5-inch Full HD display. The smartphone is powered by an octa-core MediaTek MT6753 processor along with 3GB of RAM and 32GB of internal storage, which can be further expanded up to 64GB via microSD card slot.

On the camera front, the device features a 13-megapixel rear camera with PDAF, 5P Largan lens, while for the front, there is a 5-megapixel front-facing camera for selfies and video calling. The smartphone runs Android 6.0 Marshmallow and is juiced up by a 3950mAh battery. On the connectivity front, the device support, 4G, Wi-Fi, Bluetooth 4.0, dual-SIM (hybrid) and microUSB port. The Evok Note also features fingerprint sensor at the front, which also acts as a home button. Further, the phone comes loaded with security application called Secure Space through which users can use their fingerprint to encrypt applications in their smartphone and create encrypted notes and shortcuts on their phones.