Meizu Pro 7 is all set to be launched at the Zhuhai Opera House tomorrow in China for which Meizu has already sent the invites.Alongside, Meizu is also expected to launch a Plus variant with a bigger 5.7-inch sized display which is named as Meizu Pro 7 Plus. Now ahead of the launch, some of its key specs have been leaked by a user on Chinese microblogging website, Weibo.

As per the leaked spec, Meizu Pro 7 will feature 5.2-inch display with 1.9-inch secondary display. The smartphone will come in two variants – one with Helio P25 chipset and the other with X30 SoC. The Helio P25 is said to come with 4GB RAM with 64GB internal storage while the X30 variant will come with 4GB RAM with 128GB internal storage. For the camera, it will feature dual rear camera of 12 megapixel and 16-megapixel in the front. The device features the company’s in-house mCharge for fast charging, and runs Android Nougat (7.0)-based Flyme 6. 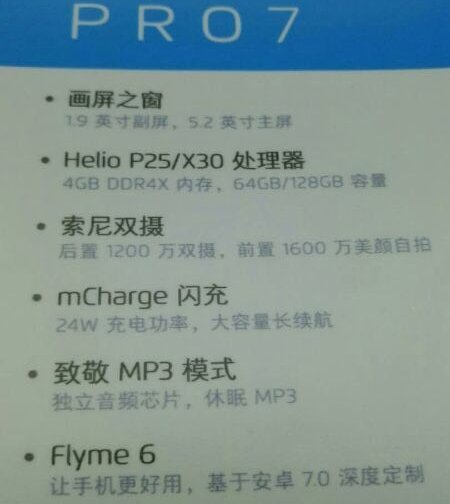 As per earlier rumours, Meizu Pro 7 will be featuring 5.2 QHD (2560 x 1440) display. It will run on Android 7.0 Nougat-based Flyme OS. The smartphone is said to come with 6GB/8GB RAM and 64GB/128GB internal storage and will be powered by Helio X30 processor. It will be backed up by a 3000mAh/3500mAh battery with Meizu’s mCharge fast charge technology. The smartphone will be powered by Samsung’s Exynos 8895 64-bit Octa-core processor. It will have a dual cameras module of 12-megapixel with Sony IMX386 + IMX286 CMOS sensor. For selfies, it will have a 16-megapixel shooter. Like, MX7, Pro 7 also supports 3D Touch.

The Meizu Pro 7 Plus, on the other hand, features a bigger 5.7-inch sized display below the dual rear cameras. Like Meizu Pro 7, it will have a secondary display on the back It will be powered by same by Helio X30 processor and same camera senors as of Meizu Pro 7. On the connectivity front, both the smartphones will offer all the usual Wi-Fi 802.11ac dual-band, Bluetooth 4.2, NFC, USB Type-C port, and a 3.5mm headphone jack.