MediaTek has come up with a new processor called the Kompanio 1300T. The processor is made for tablets and is based on 6nm process. 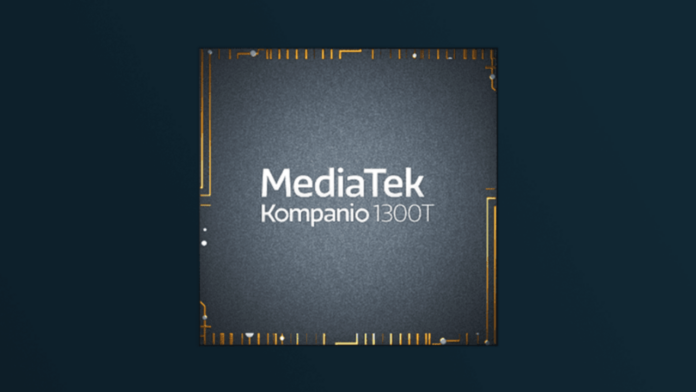 MediaTek has announced its latest Kompanio 1300T SoC designed for tablets. The chipset is similar in hardware to the MediaTek Dimensity 1200 SoC. The processor acts as a successor to the Kompanio 1200 (MT8195) announced in November last year.

The MediaTek Kompanio 1300T is fabricated by TSMC on a 6nm node. The chipset sports an octa-core processor with Cortex-A78 cores and A55 cores. The GPU department is now being handled by nine-core Mali-G77 MC9, a major upgrade over last year’s G57 MC5.

The SoC supports two 1080p displays. Coming to a single display, the chip can support up to 1440p resolution with a 120Hz dynamic refresh rate and HDR10+ video playback. The chip comes with an integrated 5G modem. It works in the sub-6 GHz bands, which further supports the dual-SIM operation and 2 channel carrier aggregation.

The chipset supports cameras up to 108 MP sensors and can record 4K video at up to 60 fps. In addition, the chip gets an APU that enables features like AI Picture Quality and voice commands. For connectivity, you get 5G, Wi-Fi 6 and Bluetooth 5.2.

MediaTek says that the first tablets with this chipset will be unveiled in the July-September quarter. In addition, MediaTek recently announced the Dimensity 5G Open Resource Architecture that will provide brands with more flexibility to customize key 5G mobile device features to address different market segments.

With access to the in-chip, multi-core AI and display processors, brands can tailor multimedia experiences and unlock more synergy between the chipset and the smartphone’s display and audio hardware. In addition, the open resource architecture gives brands the freedom to fine-tune a device’s performance and power efficiency.