While Google-LG official launch of the next Nexus phone is just couple of days away, the official press images surface online and confirm recent speculations about the design.

The next Google Nexus device manufactured by LG seems imminent with the series of information surfacing from all corners of the web. Adding to the long list of rumors, a Twitter user – known as EVLeaks – has posted the press images of the upcoming LG made Nexus smartphone which will be branded as Nexus 4. Google is hosting an event on October 29 in San Francisco where it is expected to announce the Nexus 4.

This fourth generation Nexus device is expected to have a 4.7-inch True HD IPS panel touchscreen display that will feature 1280×768 pixel resolution natively. It will house a quad-core 1.5 GHz Qualcomm Snapdragon S4 Pro APQ8064 mobile processor along with 2 GB RAM. 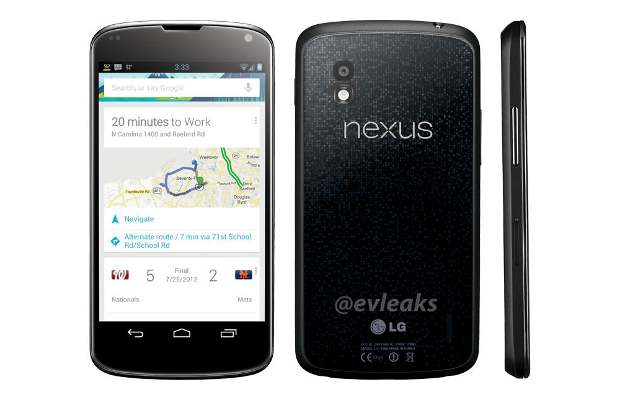 The Nexus 4 will come with Android 4.x Jelly Bean MR1 update. LG plans to offer the Nexus 4 with 8 GB and 16 GB on-board storage options and as usual, but there would not be any micro SD card slot. The Nexus 4 will be the next generation powerhouse platform that the Google Android Developers and several other third party developers will work up on.

The Nexus 4 will have 8 megapixel camera with LED flash at the back for recording 720p HD videos easily and high quality images. Though the camera may not carry top of the line image sensor, it will work great with the new tweaked camera software. There will be 1.3 megapixel camera in the front for HD video calls as well.

LG has added 2100 mAh battery to ensure longer run times. As of now, the price of the LG Nexus 4 has not been disclosed. Considering the last couple of launches, we expect it to cost around Rs 35,000 approximately and expected to launch in India by next month.