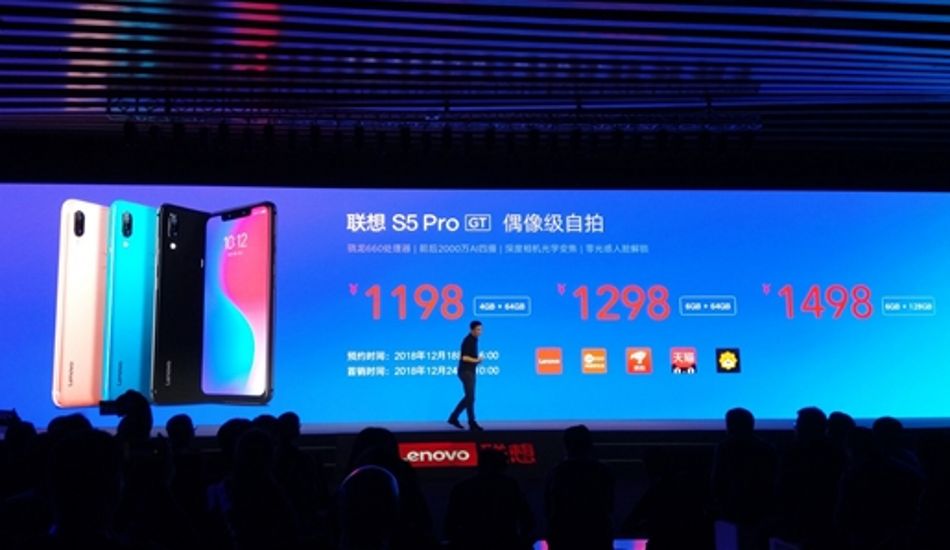 Lenovo S5 Pro GT carries the same set of specifications as of Lenovo S5 Pro except it has a powerful processor.

Lenovo S5 Pro GT carries the same set of specifications as of Lenovo S5 Pro except it has a powerful processor. The phone has Snapdragon 660 chipset as compared to Snapdragon 636 in existing Lenovo s5 Pro.

The Lenovo S5 Pro GT features a 6.2-inch Full HD+ LCD display with a screen resolution of 2246 x 1080 pixels. The smartphone comes with four cameras – two rear and two front. The dual rear camera comes with a combination of 12-megapixel and 20-megapixel setup accompanied by an LED flash. For the dual front camera, there is 20-megapixel primary camera and 8-megapixel secondary camera for selfies and video calling. Both dual camera setups are backed by AI-enabled features.

For the software, the Lenovo S5 Pro smartphone runs on Android 8.1 Oreo operating system based ZUI 5.0 and it is fueled by a 3,500mAh battery. The phone has a rear-mounted fingerprint sensor and face unlock feature as well. Connectivity options include a hybrid dual SIM slot, 4G VoLTE, Wi-Fi 802.11ac, Bluetooth 5.0, GPS, USB-C, 3.5mm audio jack.