Lenovo has been teasing its next Note series smartphone in India for quite some days on its official social media channels via various teasers now. Earlier it was speculated that Lenovo will launch K7 Note but today’s’ teasers indicate the launch of K8 Note instead.

One teaser asks to solve a math problem which when solved gives an answer 8. The answer further strengthens the possible launch of the K8 Note. It means that Lenovo is going to skip the K7 Note and will be launching K8 Note as its next Note series smartphone. 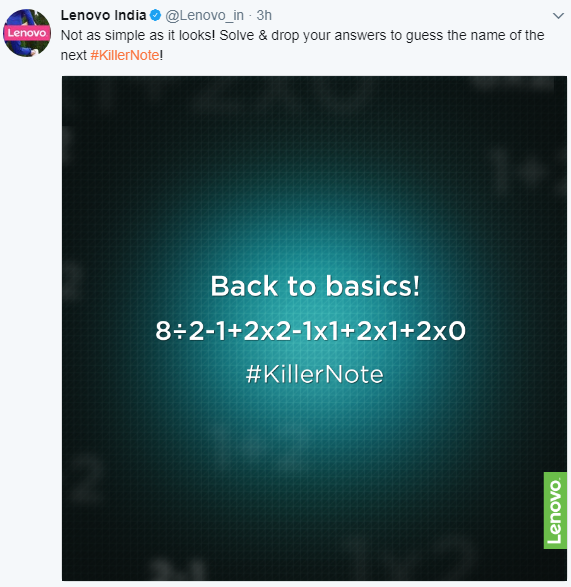 Just yesterday, Lenovo K8 Note was spotted on the Geekbench benchmarking website revealing the expected specifications of the upcoming smartphone. In the GeekBench listing, the Lenovo K8 Note got 1659 points in single-core test and in multi-core test it received 4844 points. As per the listing on Geekbench, the Lenovo K8 Note has 4GB RAM and MediaTek Helio X20 1.39 GHz deca-core processor. The handset is based on the Android 7.1.1 Nougat operating system. Meanwhile, Lenovo’s earlier teasers revealed that the processor that will power the upcoming Note series phone will be killer.

There is no information about the pricing and availability of the device as yet, however, given the fact that Lenovo is teasing so ferquently, it will not be much long for Lenovo to launch its next Note smartphone. So we request you to stay updated on our website for the same.

Lenovo K8 Note will be the successor of Lenovo K6 Note which was launched last year in India. Lenovo K6 Note features a 5.5-inch full HD display with (1080×1920 pixels) resolution. It is powered by octa-core Qualcomm Snapdragon 430 and Adreno 505 GPU. The K6 Note comes in two variants – 3GB and 4GB RAM. The K6 Note runs on Android Nougat operating system and comes with a 4000 mAh battery. Besides, the Lenovo K6 Note offers 32GB of internal storage and 128 GB micro SD card slot.

The Lenovo K6 Note boasts a 16-megapixel rear camera with LED flash and an 8-megapixel front shooter. For connectivity the smartphone has 4G/LTE, WiFi (802.11 a/b/g/n/ac), micro-USB port, Bluetooth 4.1 and GPS/A-GPS.