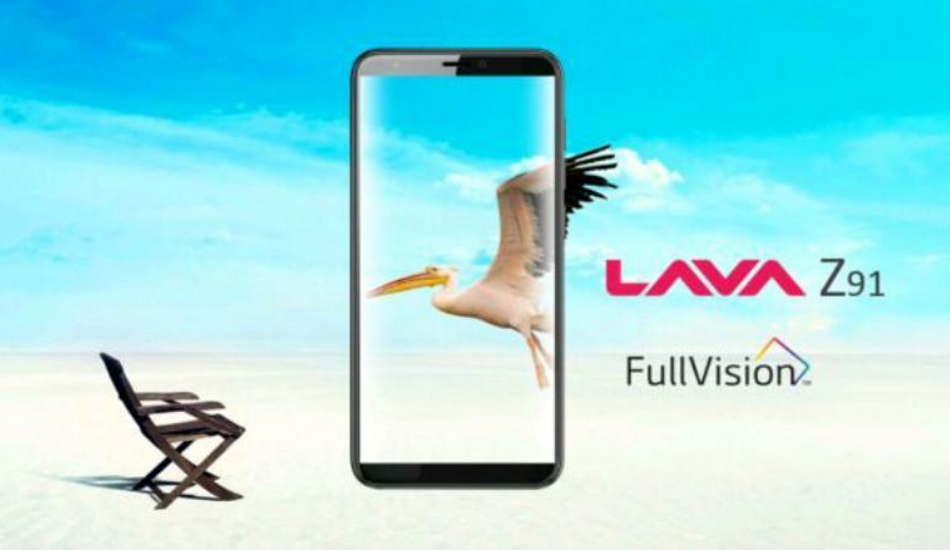 Lava Z91 features a fingerprint scanner which can also be used as a shortcut key to open apps using the fingerprints of five fingers.

Lava has launched a new smartphone under Z series – the Lava Z91 smartphone for Rs 9,999. The Lava A91 is available for purchase from physical retail stores in India. It comes with a 2-year warranty and one-time free screen replacement offer. Moreover, Airtel is also offering Rs 2,000 cashback on the purchase of Lava Z91.

The Lava Z91 has a 5.7-inch HD+ (720 x 1440 pixels) FullVision display with an 18:9 aspect ratio and 2.5D curved glass. It is powered by a MediaTek MTK6739 processor which is clubbed with 3GB RAM. The smartphone runs on Android 7.1 Nougat operating system. The Lava Z91 also comes with facial recognition technology to unlock the device by scanning the face of the user.

The Lava Z91 comes with 32GB of internal storage, which is expandable by up to 128GB via micro SD card. On the camera front, it has a 13-megapixel rear camera with f/2.0 aperture and flash and an 8-megapixel front-facing camera for selfies and video calling. The smartphone is powered by a 3000 mAh removable battery. At the back of the device, there is a fingerprint scanner which can also be used as a shortcut key to open apps using the fingerprints of five fingers. Besides, the smartphone offers Dual SIM, WiFi, Bluetooth 4.0, GPS/AGPS, FM Radio, 3.5mm jack, USB 2.0.