Just today we reported the launch of Lava A93 for Rs 7,999. Now seems like Lava is working on to launch another smartphone soon which goes by the name Lava Z60. The unannounced Lava Z60 smartphone has been spotted on a GeekBench benchmarking website which has spilt some beans on the expected specifications of the upcoming smartphone.

In the GeekBench listing, the Lava Z60 got 444 points in single-core test and in multi-core test it received 1243 points. As per the listing on Geekbench, the Lava Z60 has 1GB RAM and MediaTek MT6737 quad-core processor clocked at 1.09 GHz. The handset is based on the Android 7.0 Nougat operating system. From the specs, we expect Lava Z60 could be an entry-level or mid-range smartphone. 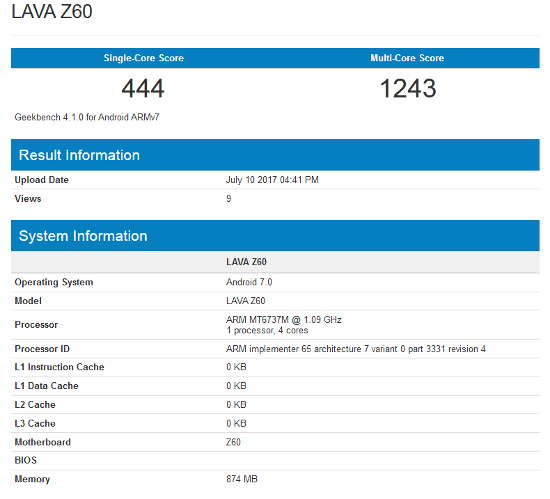 There is no information about the pricing and availability of the device as yet, however, given the fact that it has been spotted GeekBench, it will not be much longer before we see some new leaks revealing the specifications and pricing as well. So we request you to stay updated on our website for the same.

To recall the specifications of latest Lava A93, it has a 5.5-inch HD (1280 x 720 pixels) IPS display, thereby offering a pixel density of 267 ppi. It is powered by a 1.2 GHz quad-core processor which is clubbed with 2GB RAM. The smartphone runs on Android 6.0 Marshmallow operating system. The Lava A93 comes with 16GB of internal storage, which is expandable by up to 32GB via micro SD card.