Karbonn Titanium Mach One launched for Rs 6,990, upgradable to Android 5.0

The Karbonn Titanium Mach One offers a 4.7 inch HD display, quad core processor, and other usual stuff found in its competitors.

Karbonn has announced a new handset, Titanium Mach One, for Rs 6,990. The smartphone is said to be made available via Snapdeal. The device is available in three colour variants White-Silver, White-Gold and Black-Blue.

Karbonn Titanium Mach One offers a 1.3GHz quad core processor, 1 GB RAM and Mali 400 MP2 graphic processor. Though the phone has been launched with Android OS 4.4 KitKat version, it is said to be upgradable to Android Lollipop. The Karboon Mach One has a 4.7 inch HD IPS screen and 8 GB internal storage. 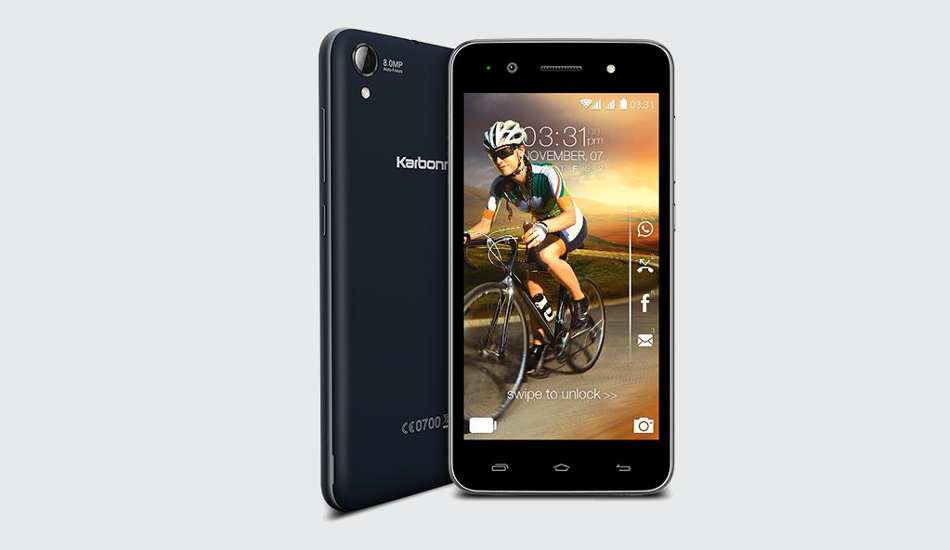 The Titanium Mach One is equipped with an 8 megapixel rear camera with BSI sensors and a 5 megapixel front camera with LED flash for selfies and video calling. Besides, this dual SIM (two 3G SIMs) smartphone has 3G, Bluetooth, WiFi, GPS, and an 1800 mAh battery.

Currently, in the same price bracket there are several attractive smartphones including Asus Zenfone 4, Redmi 1S, Motorola Moto E, Xolo One, Android One smartphones of Spice, Karbonn and Micromax, and the newly launched Lenovo A6000.