Xiaomi Redmi Note 5 has a 12-megapixel primary lens with 1.25-micron pixel and f/2.2 aperture, while for the front, there is a 5-megapixel camera with LED flash and Beautify 3.0.

Earlier today, we saw Apple also announcing the Red variant ofiPhone 8. A poster via GizChina has been released by Xiaomi official in China and it shows that the smartphone will come with a white front panel. The poster, however, does not reveal anything about the possible time frame for the launch of the new variant, but it does hints that red colour variant will be announced very soon. Once announced in China, the new variant is also expected to make its debut in India also. 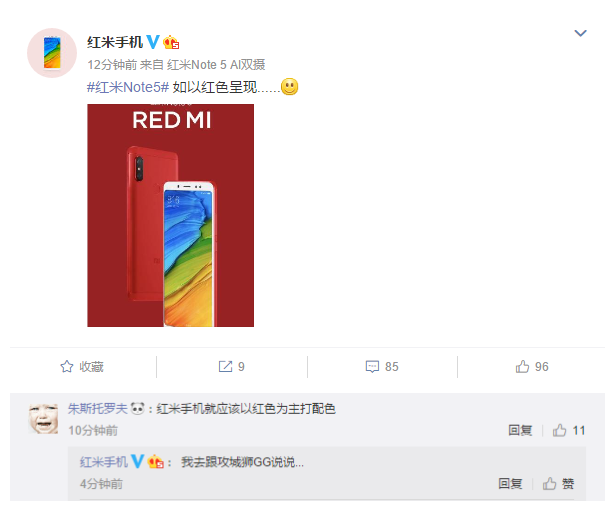 As far as the specifications of Redmi Note 5 are concerned it features a 5.99-inch Full HD+ display with a screen resolution of 2160 x 1080 pixels, a colour contrast ratio of 1000:1 and 450-nits brightness. It is powered by Qualcomm Snapdragon 625 processor along with Adreno 506 GPU. The 3GB variant of the device has 32GB of internal storage, while 4GB model has and 64GB of storage option.

Note 5 has a 12-megapixel primary lens with 1.25-micron pixel and f/2.2 aperture, while for the front, there is a 5-megapixel camera with LED flash and Beautify 3.0. A 4000mah battery powers the Redmi Note 5, and it runs on MIUI 9 based on Android 7.1.2 Nougat. On the connectivity front, the phone features 4G VoLTE, Bluetooth, WiFi, GPS, dual-SIM, and micro USB port.