The Xiaomi Mi 7 will include the under display fingerprint scanner along with the facial recognition system.

Xiaomi’s upcoming flagship Mi 7 smartphone has already been through several renders and leaks in the past. Now if reports coming from China is to be believed, the Xiaomi Mi 7 may finally be announced on May 23.

A Chinese website, CNMO, has released a leaked poster which reveals that the Mi 7 may get unveiled on May 23. The poster carries the number 7 along with the date of May 23 which hints that the company is going to launch Mi 7 on the said date. 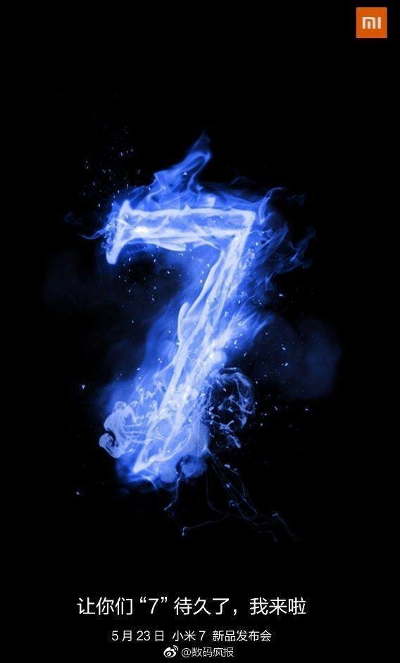 However, the company has not officially released the poster informing the launch date. So the authenticity of the leaks cannot be verified at the moment. We advise our readers to take this information with a pinch of salt.

Recently, Xiaomi Mi 7 was reported to become the 1st Android phone to have 3D sensing technology. Lei Jun, Xiaomi Founder has already confirmed that Mi 7 smartphone will come with an under-display fingerprint scanner.

Earlier Xiaomi Mi 7 was spotted on GeekBench benchmarking website with code name Xiaomi Dipper. In the GeekBench listing, the Xiaomi Mi 7 got 2449 points in single-core test and in multi-core test it received 8309 points. As per the listing on Geekbench, the Xiaomi Mi 7 has 6GB RAM and Qualcomm Snapdragon 845 1.77 GHz octa-core processor. The handset is based on the Android 8.0.0 Oreo operating system.

(Disclaimer: The above picture is a concept render of Mi 7)