Is Samsung finally embracing the notch? Leaked patent says so 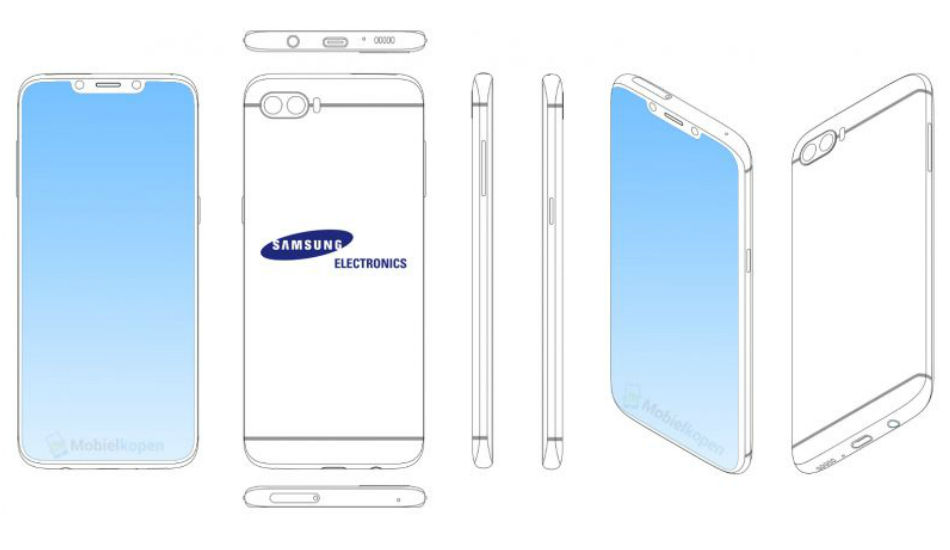 The South Korean giant might just pull everything on its sleeve when it gears up for the launch of its Galaxy Note 9.

When the iPhone X was launched, many companies made fun of the notch, with Samsung even going to the extent of making an advert which mocked the cut-out on top. While not the best feature on a smartphone, the notch did allow room for more usable screen space, thus giving a phone a better screen-to-body ratio. Even with its earlier criticism, the notch has since been adopted by the industry’s latest and greatest with Xiaomi, OnePlus and LG looking to add the notch to its upcoming smartphones. And with the latest leak, we might just see another smartphone manufacturer implement the iPhone X notch.

According to a leaked patent spotted by Mobilekopen.net, Samsung could as well embrace the notched display in its future lineup of smartphones. With the Galaxy Note 9 expected to be the next flagship device from the South Korean company, Samsung could finally be employing the notch on the Note lineup, well alongside the Pixel 3, which is also expected to arrive with a similar display.

The patent also suggests that the device will feature curved edges alongside the screen with no chin at the bottom, just like we’ve seen on the iPhone X. With no significant bezels on the front and a lack of a fingerprint sensor slot at the back, we can expect that Samsung might just implement the in-screen fingerprint technology. If not that, there are chances that the company might go all iPhone-y by introducing a facial recognition system.

Just like the iPhone X, the patent suggests that the notch on the Samsung phone will feature the earpiece, sensors and the front camera. At the back, there’s a significant difference that we can see right away and that is the company finally abandoning the centre alignment of the camera and other modules. There’s a dual camera setup on the rear end that’s now placed close to the edges with no fingerprint scanner as mentioned above.

If the picture is anything to be believed, Samsung will still employ a 3.5mm headphone jack at the bottom of the device. It appears that Samsung hasn’t placed its dedicated Bixby key on the device that has been filed for the patent, though we wouldn’t know it once we near the launch of the next Galaxy flagship. We’d thus advise you to also take the things mentioned here with a pinch of salt as we’re still months away from a potential Note 9 release.