IQOO 8 series has been set to launch on 17th August in China. The smartphone could come with Snapdragon 888+ and an LTPO QHD screen. 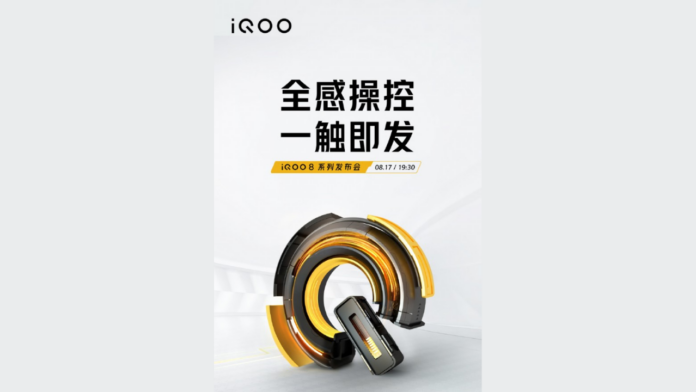 IQOO has officially confirmed that the brand will launch the iQOO 8 series in China on 17th August. The teasers for the phones have been in the wild for a while now. Leaks also suggest iQOO 8 series will be the first ones to come with Snapdragon 888+ SoC.

The brand revealed the launch poster on Weibo. The poster roughly translates to “Full Control on the verge of iQOO 8 Series Conference”. The unreleased iQOO smartphone was seen hands-on during the recent ChinaJoy convention. As per leaks, the iQOO 8 could support up to 160W charge speeds.

The phone should come with a QHD screen that offers 1440 x 3200 pixels resolution. The display has dual curved edges as seen in hands-on photos, and the bottom edge of the phone is flat. It should also get 12 GB RAM + 4 GB virtual RAM and 256 GB storage. The phone would run on Vivo’s OriginOS 1.0 based Android 11 OS.