Intex Mobiles has launched two budget 3G Android smartphones under its Cloud, which are named as Cloud X4 and the Cloud Y2.

The Intex Cloud Y2 is priced at Rs 6,190 and features a 4 inch display with 800 x 480 pixel resolution. The Cloud Y2 is powered by a 1.2 GHz dual-core processor, 512 MB RAM, and Android Jelly Bean 4.2. Along with that it comes with 4 GB of internal storage, 32 GB expandable storage slot, 5 megapixel rear camera with LED flash, VGA front camera, and a 1500 mAh lithium ion battery that company claims to offer talktime up to 7 hours and standby of 300 hours.

Intex Cloud X4, priced at Rs 4,590, features a 3.5 inch 320 x 480 pixel resolution based display. The Cloud X4 is powered by a 1 GHz dual-core processor but has 256 MB RAM only that runs the Android Jelly Bean 4.2 operating system. It comes with a tiny 512 MB internal storage out of which we suspect only about 150 MB of internal storage would be available to the user. The storage can be future expanded up to 32 GB. It has a 3.2 megapixel rear camera with a VGA front camera as well. The Intex Cloud X4 also gets a 1500mAh lithium ion battery that company claims to offer talktime up to 7 hours and standby of 300 hours. 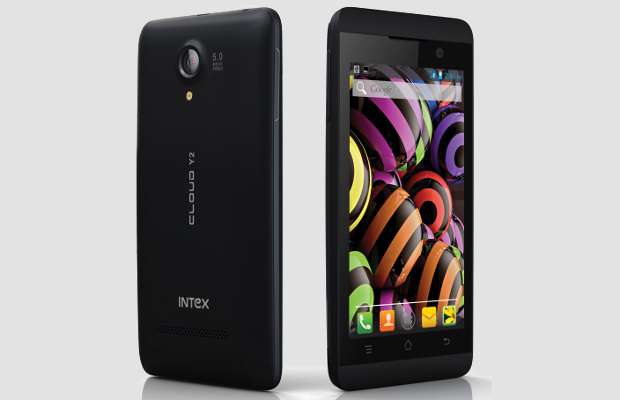