Intel has announced its next generation system-on-chip micro architecture, codenamed as Silvermont, for the mobile devices. The Intel Silvermont will succeed the current generation Intel Atom processors and will bring more processing muscle to the smartphones, tablets and ultra-portable devices. This Silvermont microarchitecture will bring several 22nm fabrication process made System-on-Chip models under the Intel Atom brand umbrella. 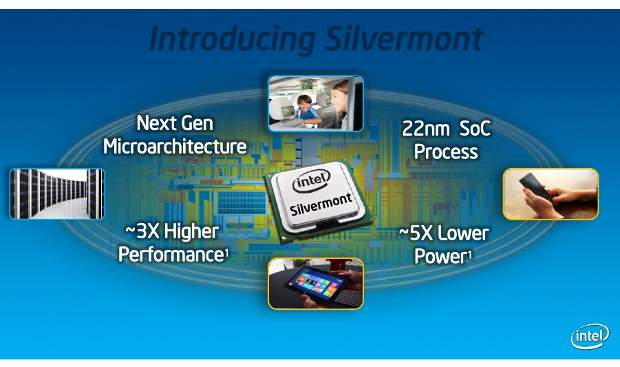 The 22nm Intel Silvermont architecture will garner two different set of mobile processors – Bay Trail for Tablets, and Merrifield for the Smartphones and other mobile devices. The 22nm Intel Silvermont promises to deliver three times more peak performance than the last year’s mobile processors under the Atom platform. These chips can deliver the same performance as last year’s 32nm chips at one fifth of the total power consumption.

The Intel Silvermont architecture based Merrifield system on chips are the direct successors of the Medfield System-on-chips. The dual-core configuration based Merrifield chips are expected to arrive before the end of this year for the Google Android platform supporting smartphones. 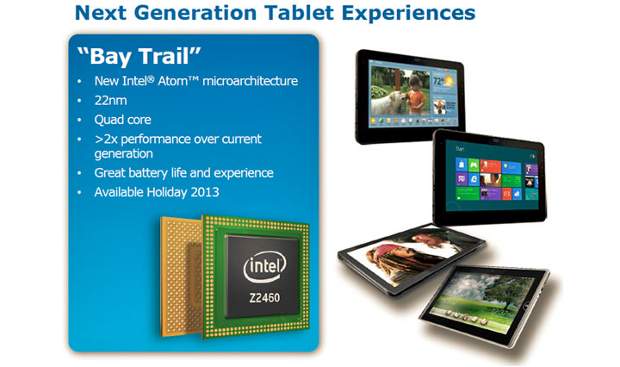 The quad-core Bay Trail mobile processors are also expected to be available at the end of this year. We can get to see the smartphones bearing Merrifield chips and tablets bearing Bay Trail chips by end of this year as well as early next year.
Intel has also integrated the security features as well as virtualization features for the several level chips based on the Silvermont architecture. Intel Silvermont based Atom System-on-Chips will run Google Android and Microsoft’s Windows Phone as well as Windows 8 platform.

We certainly have the Intel chip based Android smartphone in the mid-range segment as well as budget segment. Intel has still not given up on smartphones or tablets and intends to strike back strongly by second half of this year.