Intel, at the ongoing Consumer Electronics Show 2013 taking place in Las Vegas, has announced the launch of the new platform for mobile devices known as Lexington (Z2420), intended mainly for smartphones headed to emerging markets where price is a bigger factor for consideration of devices across various platforms.

Sid Mike Bell, vice president and general manager of the Mobile and Communications Group Intel said, “The addition of the low-power Atom platform enables Intel to address new market segments and further rounds out our expanding portfolio of smartphone offerings.” 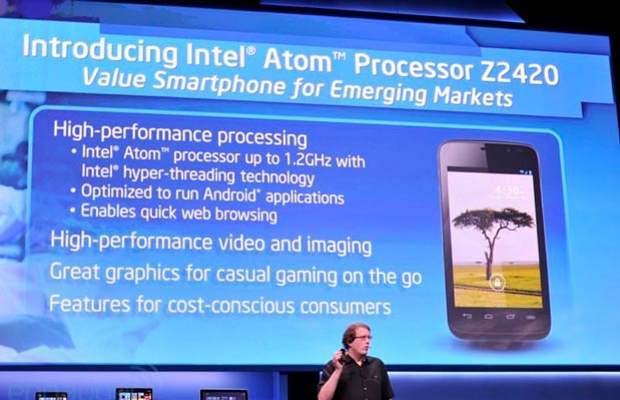 He further added, “We believe the experience that comes with Intel Inside will be a welcomed choice by first-time buyers in emerging markets.”

The Atom Z2420 based on the Lexington platform will be capable of reaching up to speeds of 1.2 GHz while utilising Intel’s hyper threading technology for superior multitasking which is fast becoming a key for most android devices.

Also the processor will be fully capable of getting HSPA+ speeds for data transfers while supporting dual cameras including a 56 megapixel front and 1.3 megapixel rear camera.

New platform will also have support for Dual SIM’s which is one of the key selling point for android devices today in India. For device manufacturers like Lava who have been the launch partners for the Intel powered devices, this new platform will add a new dimension to future expansion of their smartphone portfolio.