Infinix Helio G99 chipset powered smartphone will be launched soon. It will be a member of the Note 12 series. 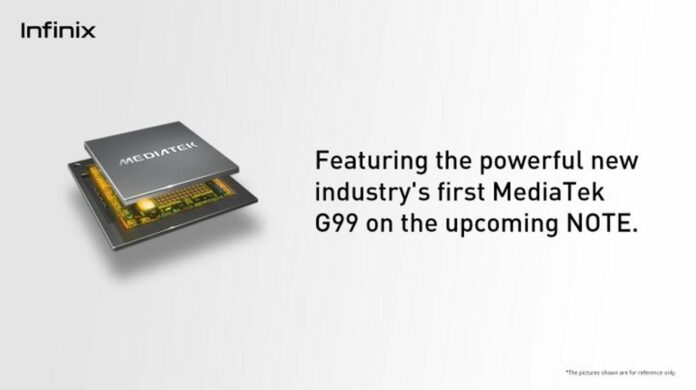 Infnix Mobile on its official Twiiter handle has announed the new development. The tweet confirms that an upcoming Infinix Note 12 series phone will feature the Helio G99 chipset. Howeevr, Infinix didn’t reveal any details about the upcoming Helio G99-powered smartphone. The Note 12 series has smartphones like Infinix Note 12, Note 12 Turbo, Note 12i, and Note 12 VIP.

The Helio G99 is based on TSMC’s 6nm process and consists of 2x Cortex-A76 cores clocked up to 2.2GHz and 6x Cortex A-55 cores that can go up to 2GHz. The CPU is paired with a Mali-G57 MC2 GPU to handle graphically intensive tasks, such as gaming and video editing.

The Helio G99 however does not come with 5G connectivity but rather is only a 4G/LTE-only chipset. The chipset supports FHD displays with a refresh rate of up to 120 Hz Further, it comes with support for LPDDR4X RAM and UFS 2.2 storage. The Helio G99 can support up to 108MP cameras and a dual 16MP configuration on the front.

Meanwhile, Infinix will launch INBook X1 Slim by June 15 in India. It will be the successor of Infinix’s INBook X1 which was launched last year in December.

The Infinix INBook X1 Slim laptop will be the lightest and thinnest laptop in the price segment, says Infinix. It will be featuring an all metal-body which is expected to be available in four trendy colors Red, Green, blue and grey.