The phone is one of the first Android 4.1 Jelly Bean based one in this price range and it comes with a 1 GHz processor, a 3.2 megapixel camera, video calling, and a data bundle from Idea.

Idea Cellular has launched a new Android based 3G smartphone called Aurus 2. It’s the first Android 4.1 Jelly Bean based device from Idea Cellular and is also one of the first across the industry in this price range.

Aurus 2 is a dual SIM phone, powered with a 1 GHz processor coupled with 512 MB RAM and 4 GB ROM (inbuilt memory, of which around 1.5 GB is usable,) and it also comes with a front facing camera. Idea has priced the phone at Rs 6,490. The phone gets a 3.5 inch capacitive touchscreen with 320 x 480 pixel resolution.

The new 3G smartphone sports a 3.2 megapixel camera at the back and a VGA camera in the front. 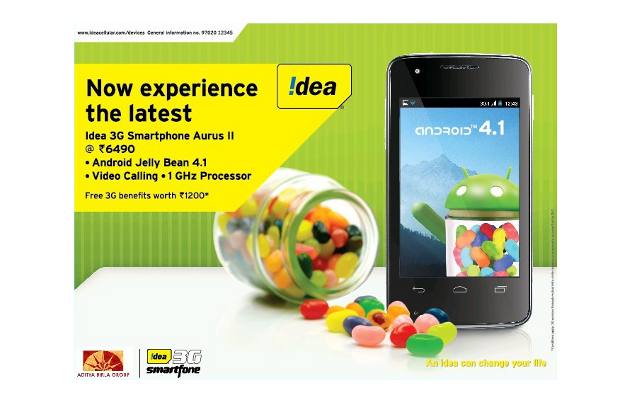 Idea Cellular has claimed to have sold over 300,000 3G smartphones over the last one year. In terms of data and other benefits Idea users will get 1.6 GB of 3G data and Idea TV subscription free for the first 3 months with a pack of Rs 261.