The smartphone is the successor of Huawei Y3 II smartphone which was launched last year in April.

Huawei had launched its Huawei Y3 II smartphone last year in April. Now seems like the company is working on its successor now which is dubbed as Huawei Y3 (2017). A set of images has been leaked of the purported Huawei Y3 2017 smartphone which has surfaced on Slashleaks,leaked by FCC. The images give us a sneak preview of the upcoming Android smartphone by the company. The leak is also supported by a user manual that throws some light on the features of the Huawei Y3 (2017). 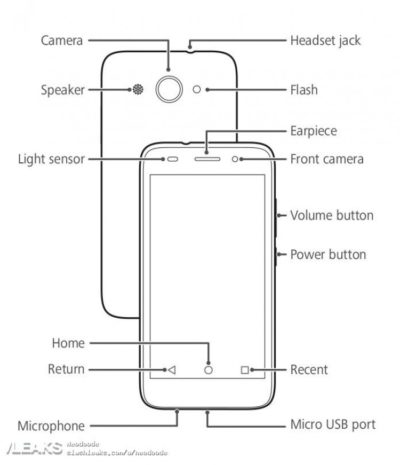 The images show that the Huawei Y3 (2017) will not have softkeys or hardware buttons on the front. As per the images, looking at the height and width of the phone, the phone is expected to have a larger display (might be 5-inch display) than its predecessor which came with 4.5-inch display. The back panel of the device is removable and shows the company’s logo, above which lies a circular speaker, a camera with an LED flash. The device has dual sim option for you to insert two micro SIM cards along with a micro SD card in a separate slot for the CRO-U00 and the CRO-L22 variants. There is also an option with only one microSIM slot for CRO-L02 variant. 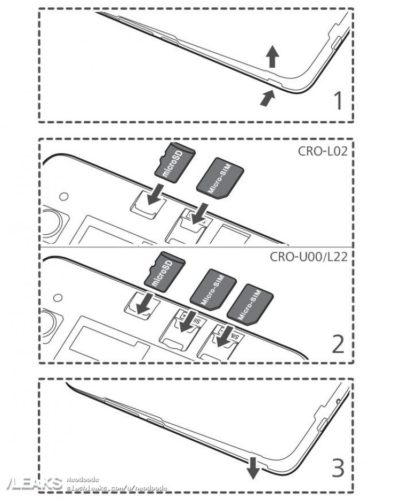 As per the images, there is a 3.5mm headphone jack which lies on the top and a microphone along with a microUSB port which is located on the bottom. Sadly, the image does not show any fingerprint sensor located on the device. The right side of the device shows the volume rocker and power button.

Currently, pricing and specifications details of Huawei Y3 (2017) are unknown at the moment. As far as specifications of the predecessor are concerned, Huawei Y3 II features a 4.5-inch FWVGA (854×480) IPS display. It comes in 3G variant that has 1.3 GHz quad-core (MediaTek MT6582M chipset) processor and 4G model that has a 1 GHz quad-core (MediaTek MT6735M chipset) processor. The smartphone runs on Android 5.1 Lollipop operating system with EMUI 3.1 Lite UI on top of it. There is a 2100 mAh Li-Poly battery.