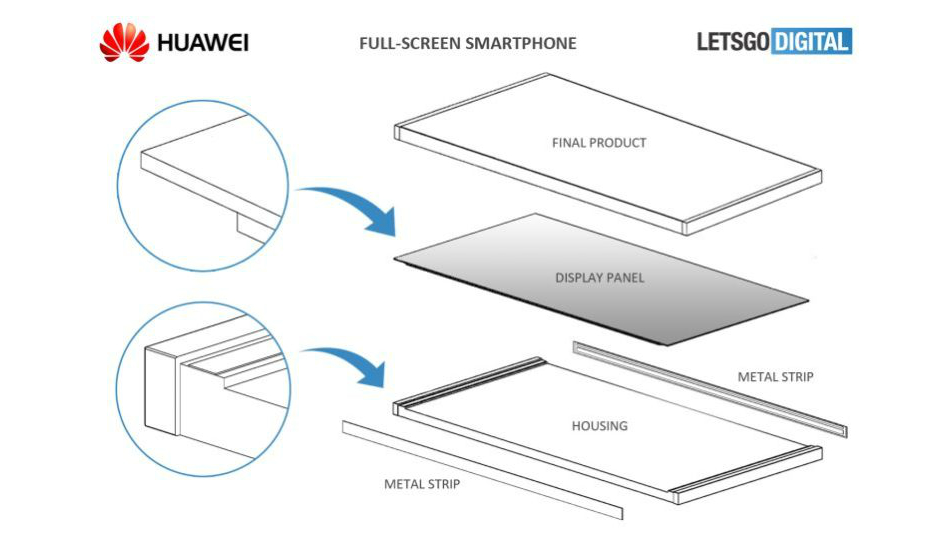 Huawei with the help of its engineers has devised a new way of holding a bezel-less display using metal strips instead of a regular frame. When glued between the housing and the display of the device, these metal strips will not only hold the display together but also make it dust-proof, waterproof and anti-static.

Huawei is reported to be developing a flagship smartphone with boasts of a 6.9-inch OLED panel on the front which is expected to be made by Samsung. While the smartphone was highly suspected to be the upcoming Mate 20 Pro, what we didn’t know was that Huawei is implementing a new screen technology for its next Mate flagship which will provide the phone with more screen space than the recently launched Vivo Nex smartphone.

A patent registered to the World Intellectual Property Organization (WIPO) and United States Patent and Trademark Office (USPTO) from Huawei appears to have been approved the use of a full-screen design on a rectangular case. Titled as a “Mobile Communications Device”, the patent which was filed back in February this year reveals that the current frame technology makes it extremely difficult to design a smartphone with minimum bezels.

According to LetsGoDigital, Huawei with the help of its engineers has thus devised a new way of holding a bezel-less display using metal strips instead of a regular frame. When glued between the housing and the display of the device, these metal strips will not only hold the display together but also make the smartphone dust-proof, waterproof and anti-static.

The touchscreen which will be placed on top of the housing will have recessed sections at the top and bottom so as to fit appropriately like seen on the image. Upon setting up, the end product will have unnoticeable bezels on both sides with the top and bottom part of the phone employing smaller than usual bezels.

The patent revealed that such a technology could also be ported for future tablets and notebooks, meaning smartphone will soon beat Vivo Nex in the screen-to-body ratio, allowing room for a bigger screen on a smaller body. While it’s possible that Huawei would be saving such a technology for the launch of a premium device, we might as well expect the next generation of Mate smartphone equip the same, since the Chinese manufacturer would want to stand behind none in offering a truly bezel-less smartphone.