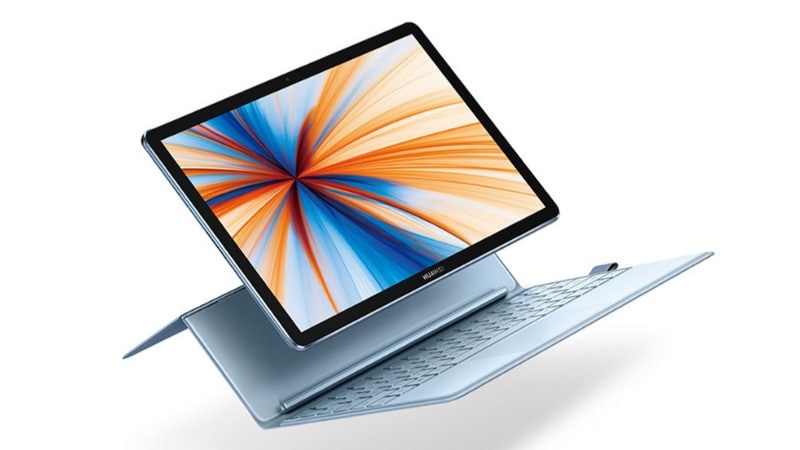 Huawei has announced a new 2-in-1 notebook – MateBook E 2019 in China which is an always-connected PC. The notebook is powered by the Snapdragon 850 processor and it runs Windows 10 Home.

The Huawei MateBook E 2019 comes equipped with a 12-inch 2K (2160×1440 pixels) IPS display with 160-degrees viewing angle. The screen has an oleophobic coating to keep it free from smudges. Huawei says it has a TUV Rheinland certification which means it is recommended safe from harmful blue-light. It is powered by the Qualcomm Snapdragon 850 paired with Adreno 630 GPU. It has 8GB of RAM and 256GB and 512GB of UFS storage.

In the imaging department, the Huawei MateBook E 2019 offers a 13-megapixel rear camera and a 5-megapixel front camera. It also has a side-mounted fingerprint scanner for security. The MateBook E 2019 works with the M Pen Lite stylus but you have to purchase that separately. The stylus can distinguish between 2,048 levels of pressure.

The MateBook E 2019 has a 36.3Wh battery which claims to offer up to 10 hours of media playback at 50% brightness. Huawei says it supports fast-charging, allowing you to charge from empty to 88% in 1.5 hours. There is support for fast charging as well, which allows the battery to go from 0-88 percent in just around 90 minutes. The device also has Huawei Share 3.0 One Touch which allows you to transfer files from your phone to the computer and vice versa.

The Huawei MateBook E 2019 includes two Dolby Atmos stereo speakers on the sides. On the connectivity front, the device has WiFi 802.11ac 2×2 MIMO, Bluetooth 5.0, a USB Type-C, a 3.5 mm audio jack and a fingerprint sensor positioned on the edge. It also supports eSIM to connect to an LTE-4G network on the move. It has dual speakers with dual SmartPA amplifier and Dolby Atmos too. The device is just 8.5mm thick (without the keyboard), 278.2mm wide and 194.22mm tall. It weighs 698g and 1.173kg when you attach the keyboard.