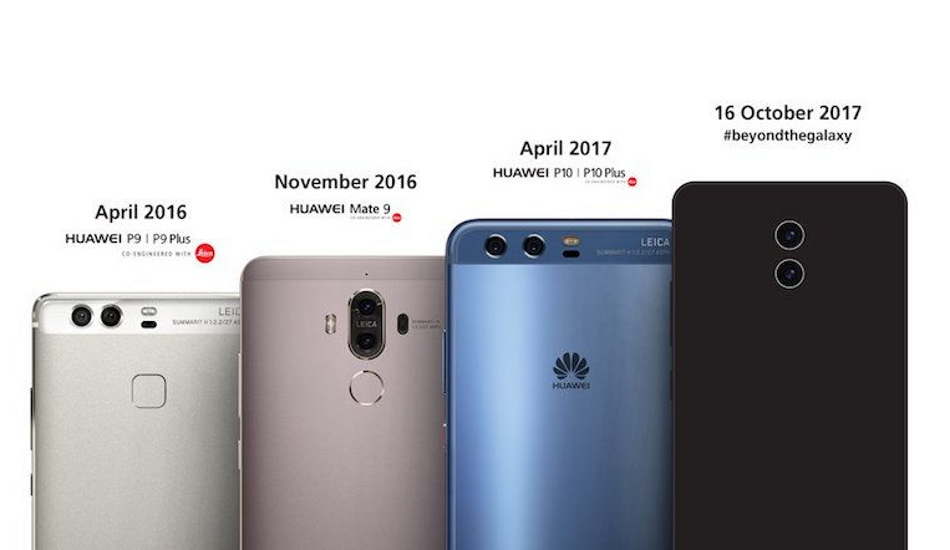 The dual rear camera set is likely to feature a 12-megapixel RGB sensor and a 20-megapixel monochrome sensor.

Huawei has posted a new teaser photo of its upcoming Huawei Mate 10 smartphone which has confirmed that the device will launch on October 16 in Germany. It will have Leica-branded dual camera setup.

The image shows the Huawei Mate 10 along with P9, Mate 9, and P10 smartphones with their launch months and year. The Mate 10 is the biggest of the four flagship smartphones shown in the image and comes with a hashtag #beyondthegalaxy which indicates that the Mate 10 is much better than any of Samsung smartphones. It is to be also noted that all the P9, Mate 9, and P10 smartphones came with dual rear cameras. The image shows the back of the smartphone revealing vertical setup of the dual camera near the centre but it does not show any fingerprint scanner on its back.

Earlier this week, the company also shared a short video teaser indicating that its upcoming smartphones will feature a dual camera setup in collaboration with German camera and optics manufacturer Leica. The dual rear camera set is likely to feature a 12-megapixel RGB sensor and a 20-megapixel monochrome sensor.