Huawei is all set to launch Huawei Mate 10 series of smartphones at an event in Germany on October 16. Just yesterday, we saw Huawei Mate 10 Pro and Mate 10 Lite specs leak revealing their specifications. Now, a new image which happens to have come from China shows the Mate 10’s front panel in someone’s hand.

The leaked image shows that Huawei Mate 10 will feature an almost bezel-less screen with a small Huawei logo on the bottom. Since the image shows only the front panel, we expect the device to feature fingerprint sensor only at the back since the front side does not show any fingerprint sensor. A few days ago also, a leaked image that surfaced online showed Huawei Mate 10 with its edge-to-edge display and button-less front. Today’s leak is inline with the previously leaked render. 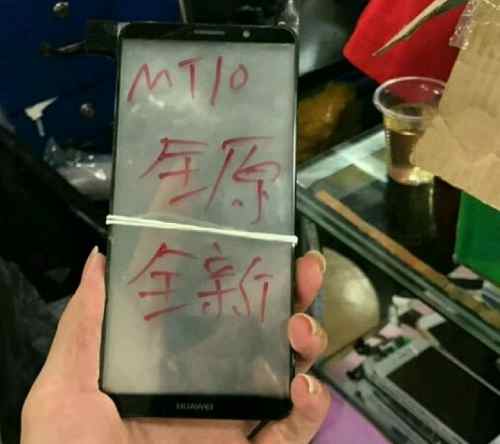 The Mate 10 Pro codenamed as Blanc will sport a 5.99-inch QHD display with 1440 x 2880 pixel resolution and 18:9 aspect ratio. It will be powered by Kirin 970 SoC coupled with 6GB RAM while internal memory options include 64GB and 128GB. The Mate 10 Pro will boast a dual rear camera setup comprising of 12megapixel and 20megapixel sensors co-developed with Leica. It will reportedly run on Android 8.0 Oreo operating system and will be backed up by a 4,000mAh battery. Some other features it offers include IP68 water and dust certification and an LTE Cat. 16 modem.

It is said to Mate 10 Lite and Mate 10 will be launched on October 16 and ship the same month, but the Huawei Mate 10 Pro is rumoured to ship only in December powered by Android 8.0 Oreo with EMUI 6.0.