Huawei Ascend P7 now official, may come to India too

As compared to its predecessor, the Ascend P6, the new phone brings a better display and is much better in terms of design and camera.

Huawei has announced its next flagship smartphone, which is named as Ascend P7. As compared to its predecessor, the Ascend P6, the new phone brings a better display and is much better in terms of design and camera.

To start with, the Huawei Ascend P7 comes with a 5 inch display with full HD resolution against the 4.7 inch HD display of Ascend P6. The P7 measures 139.8 x 68.8 x 6.5mm thus it is a bit thicker and taller and even broader than the P6 which is quite obvious as the new handset has a bigger display. Besides, the Ascend P7’s display as well as rear panel has Corning Gorilla Glass 3 protection.

Huawei Ascend P7 has a the Huawei-made HiSilicon Krin 910T chipset sporting 1.8 GHz quad-core Cortex-A9 CPU, Mali 450 GPU and 2 GB RAM. The phone runs on Android 4.4 KitKat operating system and has Huawei Emotion 2.3 user interface. It has 16 GB internal storage and an expandable storage slot that can accomodate a microSD card of up to 32 GB capacity. 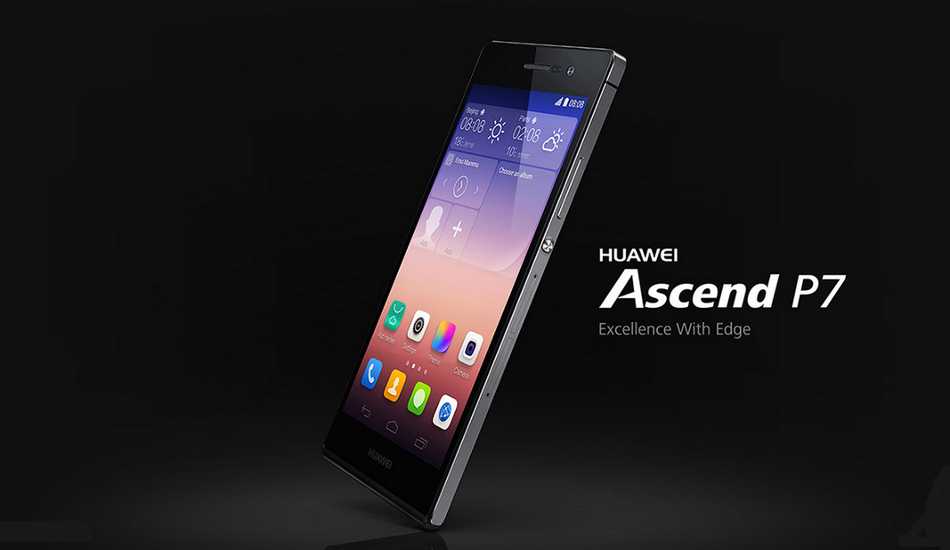 The Ascend P7 features a 2,500mAh Li-Po battery which claims to provide 14 hours of talk time. It has a 8 megapixel front camera with BSI sensor and 5-pieces lens while at the back, there’s a 13 megapixel snapper with Sony BSI sensor and f/2.0 aperture. As per Huawei, the rear camera can shoot 1080p videos.

For connectivity, the Ascend P7 has LTE, Bluetooth 4.0, WiFi 802.11n, microUSB 2.0 and NFC. Its not clear though whether it will support the Indian LTE version or not.

The phone is said to be available internationally from this month in black, white and pink colour options. Though the first list of markets does not include India but we are hopeful of its arrival in few months as Huawei had launched its predecessor, the Ascend P6, in the country sometime back.

Huawei had last month launched Ascend G730 and Ascend Y600 phablets in India for Rs 13,999 and Rs 8,999 respectively. Both the phones feature dual SIM support with dual standby functionality. Also, they have the Android 4.2 Jelly Bean operating system, 4GB of inbuilt storage, 32 GB expandable storage slot, 5-megapixel rear camera and 0.3-megapixel front camera. Besides, both G730 and Y600 have WiFi (802.11 b/g/n) and GPS with A-GPS. The Ascend Y600 has Bluetooth v3.0 while Bluetooth v4.0 is in Ascend G730.